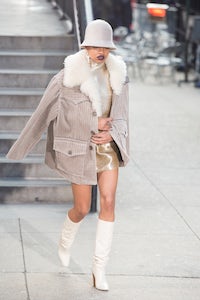 NEW YORK, United States — Marc Jacobs has celebrated New York every which way in his collections: uptown, downtown, past, present, future. But what he offered on Thursday afternoon felt different. He described his show as "a gesture of respect for a generation that will forever be the foundation of youth culture street style" — the hip hop generation, the ultimate outsiders who came to reshape the mainstream.

In fact, the show was called Respect, significant given how it implies a mutuality of feeling which is singularly absent in the power games being played on the political stage right now. Respect is survival, because disrespect has proved lethal on city streets.

Just about everything was short, flared over spindly legs raised on chunky platforms, deliberately exaggerated in the cartoon-ish way that hip-hop style exaggerated everything. And yet, Stephen Jones beanies and all, it had a real feel- in a way that Jacobs' fashion fantasias don't always -because it was rooted in the otherness of the street.

The presentation went further than "real". It was strictly bare-boards raw. No music, no spectacular set, just two rows of chairs which stretched the length of the Park Avenue Armory. And a ban on social media-friendly photography too. That might have been Jacobs' dig at his corporate overlords who, rumour has it, have been tightening his pursestrings.

Or maybe it was just his way of reminding us that hip hop came from kids with nothing, ingeniously shaping their own destinies in the face of withering indifference from the dominant white culture. It's happening again.

On every chair was a plain brown cardboard folder, in which Jacobs explained how this collection came into being. The semi-manifesto was a first for him, and surely relevant in that he clearly wanted to leave no margin for misinterpretation. After their procession through the bowels of the Armory, the models grouped on the street outside, where Joel Meyerowitz, a pioneer of New York street photography, was waiting to memorialise them.