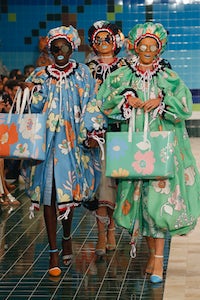 NEW YORK, United States —  The show that Thom Browne staged on Monday night may have been one of the most extraordinary from a designer who has made a career of plumbing the heights — and depths — of fashion spectacle. Odd that he didn’t see it that way, but then Thom Browne is an odd bod.

The initial spark for his new collection was Slim Aarons’s classic 1955 image of socialite CZ Guest poolside in Palm Beach (the photo is called “The Good Life”). From that, he created his mise-en-scene: swimming pool trompe l’oeil-ed from Hockney-blue tiles — which he populated with chattering chicks in floralled gazar caftans and huge matching bathing caps.

A little bit of Lilly Pulitzer making for an utterly surreal poolside tableau into which a silver-sequinned goddess gracefully moved, atop her head a headpiece of Hector, Browne’s dog, rendered by master milliner Stephen Jones in mirror embroidery. Mesmerised, the chicks stilled their chatter.

All hail the power of Hector. “It’s the fun, the pleasure he gets from simple things,” said Browne. “I find that beautiful.” Sentiments that dog owners everywhere could comfortably echo. Except few of them would go on to create a collection of clothes that celebrated fun with such extravagant craft that it was not only the chatter of the poolside doxies that was stilled. Cue intake of breath from audience as models slough off their caftans.

Browne already explored the idea of entire outfits formed from trompe l’oeil onesies in his men’s collection. Here, he took that idea to an illogical but thrilling conclusion. You could take just one look as an exemplar: a blouse, a waistcoat, a jacket, a skirt, each individual item sweetly sequined, but also co-joined to form one single piece of clothing, with a zip down the back for easy access and exit.

It would be easy to rattle on in describing the fiendish ingenuity with which Browne created an outfit where the integrity of each piece would be preserved — the blouse in gingham, the knit cardigan, the skirt woven from ribbons of leather — even as they were collaged together to form one single dress. To emphasise the singularity, Browne had his models zip themselves out of those onesies and pose demurely “poolside” in knit bathing suits in his signature red, white and blue stripe. At which point in the show, the silvery goddess returned again to centre stage and revolved slowly while spotlights refracted off her mirrored headpiece. Like I said, you’ll believe a dog’s head is a disco ball.

In fact, with times so uncertain, you may even need to believe in such gorgeously peculiar fancies. It has never been Browne’s thing to attach any kind of wider significance to what he does, but the hilarity and beauty of his presentation — and the collection it showcased — read like an irresistible, provocative antidote to the woes of the world. Say it again: all power to Hector.