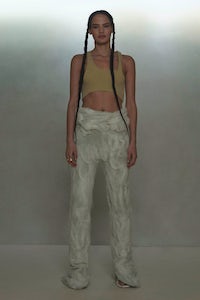 PARIS, France — While every other American in Paris for Fashion Week was looking to get home as quickly as possible to start their self-quarantine, Kanye West was travelling in the other direction, bringing his gospel service to the Théâtre des Bouffes de Nord in the 10th arrondissement on Sunday morning and launching his new collection, Yeezy Season 8, on Monday night in Espace Niemeyer, the headquarters of the French Communist Party.

It’s been two years since West showed Yeezy Season 7, on Pier 57 in New York. What’s happened since? Well, ever a lightning rod for controversy, he’s inexplicably aligned himself with Donald Trump and waged an - at times - very public battle with bipolar disorder. He’s a married man, father of four, and intensely religious. He owns a ranch in Cody, Wyoming, where he said he spends maybe 30 to 40 per cent of his time.

In fact, the invitation “from the West family” for his presentation also read like this: “Here is a little piece of our home in Cody Wyoming.” It arrived in a canvas bag with a small envelope labelled “One dozen rattlesnake eggs” and a caution: Keep in a cool place to prevent hatching. Open the envelope (who wouldn’t?) and a rigged spring fired a chunk of sage at you with a startling crack. My friend Cathy, who knows about such things, told me it’s an old cowboy practical joke.

So was the sage the little piece of home? Or the joke? Or the collection? It was small — less than 20 pieces —and West at first stationed it on models as a still-life under the impressive dome of Brazilian architect Oscar Niemeyer’s National Council room. The pieces evolved the body-consciousness that marked his fashion efforts in the past - leggings, bra tops – and added quilted and padded pieces in various sculptural proportions, along with tops and bottoms cut from woolly fleece.

West said the wool for production (should that ever come to pass) would come from the herd on his ranch. There's a little piece of home right there, though we could, I guess, also take it as his awareness of the circularity debate. His fabrics — the muslin, the Tyvek — met sustainability standards too.

The hooded, quilted, padded and rubberised elements inevitably suggested protection. West acknowledged he’s always been obsessed with Hazmat. But a more obtuse obsession emerged as he talked about his collection. When he referred to his designs as “service clothing”, he seemed to be referring to clothes for home help. “People haven’t taken time out to really think about and design for those people.” Did he mean his household staff? He did make reference to his daughter talking about “all the people at our house that work with us.”

Speaking of North, she performed a rap number to accompany her father’s clothes when they eventually made it out from under the dome and onto the public platform in the open air. She is six. It was maybe 10 p.m. and chilly. “Chip off the old block” sounds like it has something to do with cowboys.

There were ways in which West was the same old Kanye. Always a design buff, he said Espace Niemeyer was his very favourite building, and called Belgian interior designer Axel Vervoordt, the man who designed the Wests’ home in Calabasas, an inspiration. He credited the rough, unfinished look of his collection to conversations with Vervoordt about the Japanese concept of wabi-sabi.

West was also the big talker of yore. He insisted each of his pieces was a new invention, as guaranteed to become influential as the 350 Yeezy Boost, “the most iconic shoe of the past 50 years” (or was that 15? My hearing ain’t what it was).

He compared his return to fashion to “getting back on the horse.” Where else but Paris to do that, coronavirus be damned? He said he brought the Sunday Service as an expression of his commitment to spread the Holy Spirit. “It’s my job as a Christian.” He is, in his own words, “saved.” But if West has God in his heart, there are many who believe that Donald Trump is still the devil on his shoulder. "Getting back on the horse" isn't likely to change that.