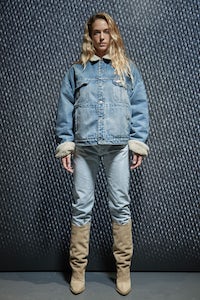 NEW YORK, United States — Fashion people love to complain, but they also hate missing out. So it’s no surprise that, even after last season’s exceedingly hot, exhaustion-inducing field trip to Roosevelt Island for Yeezy Season 4, the bleachers of Pier 59 were filled long before Kanye West’s latest collection hit the runway, 25 minutes after the appointed hour, as close to punctual as New York fashion shows typically get.

West played nice for the fifth season of his Adidas-backed collection. He chose an easy-to-access venue, just a few-minutes walk from Milk Studios. He moved up his show time by two hours after the CFDA complained to the press about his lack of consideration for the designers already scheduled to present in his preferred slot.

The good behavior could be linked back to West’s longheld desire to be accepted fully by the fashion community. He has the support of Anna Wintour, and one gets the sense that he doesn’t want to disappoint her or others in high places. (After the show, the Condé Nast artistic director was beckoned backstage by his wife, Kim Kardashian, who was dressed in burgundy Yeezy, glossy black hair straightened to sticks.)

People continue to ask why West can’t stop and won’t stop. Besides that desire to be liked and admired, and an unmatchable drive to achieve, the collection also seems to be commercially viable. Yeezy Season 3 sold better at retail than the first two lines. And according to a source in West’s camp, wholesale orders for Season 4, which hits stores this spring, were the largest to date.

It’s pretty normal for an upstart label with heat to see a continued uptick in sales in its first few seasons, so that’s not a surprise. But it has clearly been worthwhile for both West and Adidas Originals to continue their partnership. (A pair of Yeezy Boost 350 V2s — a rubber-sole sneaker with an engineered-knit upper — dropped on February 11 and instantly sold out. Another colorway, set to hit on February 25, is hotly anticipated.)

In that way, the fashion industry needs Kanye West as much as he needs them. It’s bad out there for retailers, and West is undoubtedly driving sales, not only for his own brand but for the brands he worships.

He also seems to enjoy the process. This season, longtime collaborator Vanessa Beecroft and her army of bodies were nowhere to be seen. Instead, each model stepped onto a rotating platform backstage to be captured in realtime. The resulting video feed — which looked holographic — was projected onto a Green Giant-sized square pillar in the center of the venue. After each look was presented, the models took a traditional finale walk around the pillar, The-Dream singing J. Holiday’s “Bed” — co-written by West — playing on repeat.

It was an interesting way to see the clothes, which were wholly inoffensive. At the time of this writing, there were no show or inspiration notes made available, but the Levi’s-style stonewash jeans, denim work shirts, and sleek suede cowboy boots for women were very good looking, if indiscernible from similar garments produced by others. Also in footwear: A new running sneaker, which West first wore out in public on Valentine's Day and was then shown extensively on the runway, is sure occupy hypebeasts for months to come. The full-body suits and droopy sweatshirts were there, too, mixed in with more ambitious full-length fur coats and head-to-toe camouflage.

In the mix were several pieces of Calabasas merch, a capsule of heavily branded track pants, scribbled-on sweatshirts and letterman’s jackets nodding to the tony Los Angeles suburb, full of gated communities, that’s home to West and his in-laws, as well as Drake. (References to “Lost Hills,” which the internet believes is a yet-to-be-released album made with Drake, remain a mystery.)

It will probably sell-out. A win-win for everyone, especially those who were able to exit the venue before 4pm.