This season, a surprise return to snowboarding prompted the designer to reconsider the beauty of old-school ski suits. 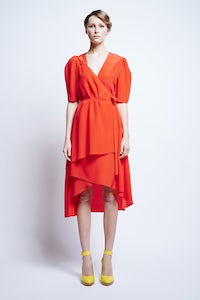 This season, a surprise return to snowboarding prompted the designer to reconsider the beauty of old-school ski suits.

NEW YORK, United States — Last winter, Karen Walker’s seven-year-old daughter convinced her to strap into a snowboard for the first time in a decade. “Remarkably, I didn’t break a wrist or anything,” the New Zealand-based designer teased on a recent phone call. Revisiting the sport did get her thinking about snow gear, however. “This collection is about combining the functionality of old-school ski suits with an underpinning of 1930s and 1940s glamour,” she said of her Pre-Fall offering.

In her research, Walker unearthed a photo of Elsa Schiaparelli skiing with her own daughter, Gogo, in St. Moritz in 1934, and pinned it front and centre on her mood board. The ski suit reference was subtle, surfacing through the embroidered diamond motif on a sweatshirt and the elasticised ankles on a pair of denim trousers. More than anything, though, this collection was about those 1930s and 1940s shapes, from the tangerine silk wrap-front tea dress with lingerie details to the tulip-front top, done in cappuccino leather and decorated with puffed sleeves. Walker has a knack for mixing doll-like details, like oversize ruffles and ruching, with more utilitarian pieces, such as this season’s seamed-and-cropped chinos, for a look that’s more cool than cloying. While it’s clear that Walker’s ever-popular eyewear range is the company’s bread and butter, more retailers should think about selling her actual clothes, most of which are priced well under $500. Not a bad price for real fashion. 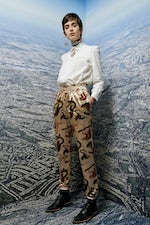 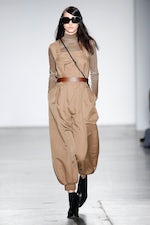 The Fashionable and the Functional 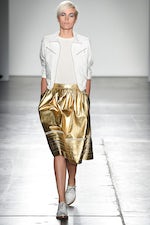