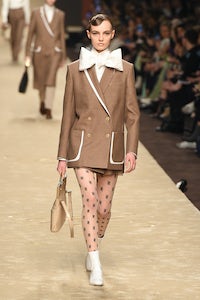 MILAN, Italy — It was 1965. Silvia Fendi was five. She had no clue what the man did, but she remembers her mother Anna loving him more than anything. Anna had more time for him than she had for her own children, so he must be important. Silvia thought he was maybe a painter. A few years passed, and the man began to acknowledge the family. He was going to do his first show for Fendi. It was a revolutionary moment in society. He wanted to show men and women dressed in the same way. He used the Fendi children: Silvia dressed in white patent pants, a little blouson, lizard shoes, a jockey hat, like the ones she showed on Thursday. “He liked me,” she remembers. And at last she understood what he did, why he was important to her family.

That was when and how Silvia Venturini Fendi and Karl Lagerfeld forged the bond that shapes the house today. His last phone call — maybe the last one he made — was to her on Monday, worrying that the new collection wasn’t going to be enough. “I’m not going to be there,” he told her.

But he was very present at the show on Thursday. “We wanted it to be faithful in a light way,” said Silvia. So there was Gigi Hadid in a dress in the distinctive yellow Lagerfeld has decided should be the Fendi colour. There were blouses with the distinctive high collars of his shirts from shirtmakers Hilditch & Key in London. There was the rigour of the tailoring — the jackets, the pleated skirts — but there was also the lightness of the perforations that elevated a leather shirtdress, a skirt, a bodysuit. Lagerfeld’s work at Fendi always struck a balance between past and future. Art and science, if you like.

The last track was Bowie’s “Heroes.” There’s an ambiguous note in that song that isn’t often remarked on, but Silvia unwittingly recognized it when she mentioned that she had followed Karl through the good and the bad. Like her mother and her aunts: “Five visionary women who had the courage to follow one visionary man,” she called them. “And I’m a Fendi, I’m tough,” she said. “But Karl was a Fendi, too.” And here was a collection to acknowledge that for the ages.