Paris is on a post-Macron high, but the chord Lagerfeld struck at Chanel was all things must pass. 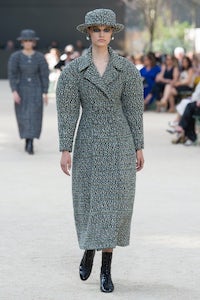 Paris is on a post-Macron high, but the chord Lagerfeld struck at Chanel was all things must pass.

PARIS, France — “Vous etes Paris!" gushed Anne Hidalgo, the city's mayor, as she honoured France's favourite German import with his Medaille Grand Vermeil de la Ville at the end of the Chanel couture show on Tuesday morning. It’s the highest honour the city can bestow, and Karl Lagerfeld and Hidalgo were, appropriately, standing under the Eiffel Tower for the ceremony. Well, not quite. It was a spectacular simulacrum erected in the Grand Palais, its pinnacle lost in the clouds that swirled under the venue’s roof, merely the latest grand illusion from fashion's most imperial showman.

The Frenchness of it all fed into a collection that felt like a contemporary distillation of Chanel’s own straightforward ethos, the one with which she transformed womenswear in the early 20th century. The presskit emphasised it by juxtaposing mirror images of key looks and their stark silhouettes: long menswear-inflected coats, cardigan jackets, lean tunics matched to skirts falling to mid-calf -- all in Chanel’s signature tweed. The hats were Coco’s boater. The cumulative effect, especially when the models walked out two by two for the finale, was of a strictly regimented femininity. Like schoolgirls.

But Chanel herself defied regimentation, and, in that spirit, Lagerfeld blurred the structure with explosions of feathers, wrapping arms, trimming hips and hems. The closing look — before the couture bride made her stately entrance — was a tiered trapeze, defined at bodice, waist and floor-sweeping hem with rosettes of feathers. The tulle was sprinkled with crystals, darkly sparkling. The funereal majesty of the outfit sealed the sombre nature of the collection. Paris is on a post-Macron high. You can feel the city readying itself for renaissance. But the chord Lagerfeld struck was all things must pass. This lion is in winter. And a front row of Kristen Stewart, Katy Perry, Cara Delevingne and Tilda Swinton, hair cropped uniformly, militantly close, were like his shock troops for the turmoil to come.