The Rodarte sisters' work has occasionally been labelled pretty, but there’s always something weird too. 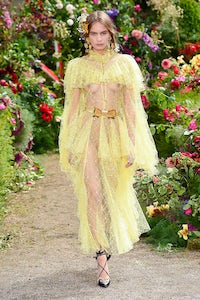 The Rodarte sisters' work has occasionally been labelled pretty, but there’s always something weird too.

PARIS, France — The cloisters of a shabbily charming 16th century building some distance from the centre of Paris don’t immediately present themselves as the dream venue for something as auspicious as the Paris debut of American fashion’s sweethearts, but Kate and Laura Mulleavy are keen storytellers — and dreamers — so there was actually a logic to their choice. The building was once a hospital. Imagine if those humble old walls could talk. All those songs of innocence and experience? Perfect for one of the sisters’ signature time-melds.

After years of presenting in a New York gallery space, with arty installations of neon tubing and moon rocks dressing their sets, the Mulleavys knew they wanted to show in a garden when they crossed the Atlantic. That organic backdrop, artfully augmented with flowers, paradoxically amplified the artifice – the weirdness — of what they do. They tucked some neon tubing in amidst the greenery, just in case anyone missed that point.

Laura mentioned Robert Altman’s "3 Women" as a reference: the colour palette, the murals one of the women paints, the shifts in personality the film explores in its three main characters. She also noted that such inspiration is amorphous, its relevance changing from the beginning to the end of the sisters’ creative process when they’re working on a collection. Probably just as well, given the opacity of  "3 Women." But there was one way in which it reflected the essence of the new Rodarte collection. Altman’s movie was an intimate little thing filmed in a super-widescreen format. And that same combination of tiny details and broad sweeps made the Mulleavys’ work jump from the opening look, a sheer fairytale confection in yellow lace that was anchored at the waist by a big copper bow. In the same vein, a long floral dress that ended in ruffles managed to turn a lady of the canyon into Wonder Woman with a long, flowing cape of the same fabric.

Actually, that look made an interesting conceptual point about the toughness of the Rodarte woman. It was compounded by the look immediately following: cropped white leather jacket, low slung matching pants, pearl button detailing. Rodarte has occasionally been labelled “pretty," like that’s some kind of pejorative. There were some exceptionally pretty tiered dresses in pale-coloured point d’esprit towards the end of the show, but, as Laura was happy to point out, “It’s never too pretty, there’s always something weird.” And maybe the weirdness in this case was that those pretty pieces had the columnar grandeur of Adrian’s dresses for Norma Shearer, hardly a star who would speak to Rodarte’s young Hollywood clientele.

The show was draped in baby’s breath, armlets, stoles, crowns of it. And branches dragged behind the models. It’s a staple of bridal bouquets. Then there were all those bows everywhere, many of them metal. The tension between naivete and worldliness reminded me of "Westworld,: which seems like an ideal environment for the Mulleavys’ work. "After the Goldrush" played on the soundtrack, its contrasting visions of Middle Ages and space age an ideal aural counterpoint for Kate and Laura’s Weirdworld.