Carol Lim and Humberto Leon remixed Kenzo's history into young, fun, easy clothes for a generation that most-probably missed them the first time around. 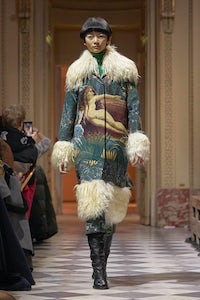 Carol Lim and Humberto Leon remixed Kenzo's history into young, fun, easy clothes for a generation that most-probably missed them the first time around.

PARIS, France — It’s been said that the French artist Henri Rousseau referred to 19th century fashion journals when painting his portraits, a fact not lost on Carol Lim and Humberto Leon when researching the main inspiration for their third round of La Collection Memento. Positioned as a separate line to their main Kenzo event in January and June, the concept began by tweaking Mr. Takada’s archives, yet in three seasons has evolved through a more nebulous approach of remixing the brand’s history into young, fun, easy clothes for a generation that most-probably missed them the first time around.

In the Monnaie de Paris, the latest ‘Memento’ was paraded around dining tables laden with Angela Dimayuga’s convincingly tropical catering install which, despite sub-zero temperatures outside, set the scene for a riot of Rousseau-inspired wares. His verdant jungle masterpiece “The Dream” — a MoMa acquisition, donated by a Rockefeller in the 1950s — was picked apart and splashed across the collection: a tapestry poncho, jacquard jeans, printed frocks, and landscape sweaters all contributed to the arts & crafts moment we are seeing across fashion, from Loewe’s William Morris collaboration, to NYC newcomer Bode’s repurposed vintage creations. Striped, ribbed, and ruffled knitwear was the show’s other big message, diffusing the bucolic mood with punchy, multi-coloured sweater dresses, turtlenecks, and flounced skirts.

As the show began, a troop of ‘art handlers’ marched life-size reproductions of Rousseau paintings through La Monnaie's halls. Like the clothes that followed, they weren’t the originals but — for 2018 intents and Millennial purposes — they did the job.