The highlights of Carol Lim and Humberto Leon's respectfully tweaked re-edition collection balanced out the trickier designs of their mainline shows with a decidedly streetwear edge. 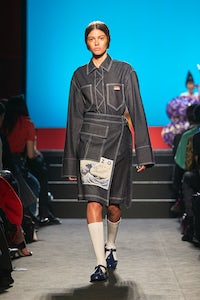 The highlights of Carol Lim and Humberto Leon's respectfully tweaked re-edition collection balanced out the trickier designs of their mainline shows with a decidedly streetwear edge.

PARIS, France— By combining their women’s and men’s collections at shows staged on the January and June menswear calendar, Carol Lim & Humberto Leon saw an opportunity for change at Kenzo. Helming the maison of a living legend, as they do, the pair have played his archives with a deft hand yet their MO of forward-thinking design has often left the pair tip-toeing around the true icons of his early days. Enter ‘Collection Memento,’ their respectfully tweaked re-edition collection that debuted in March and serves to bridge a gap between the staggering history of the house and its youthful audience, most of whom are discovering Mr. Takada’s ideas for the first time in Lim & Leon’s era.

Using a smaller, more intimate presentation format to their advantage, tonight’s Memento N°2 collection was unveiled in high style at the Trianon theatre, where they invited a troupe of ‘Kagura’ dancers straight from Hiroshima to bookend the runway show with a lively rendition of “Yamato No Orochi”. Not familiar? Neither were we, but turns out it’s an energetic swirl of articulated paper dragons fighting samurais! It created a loose but authentic association with the collection’s Asian-American conceit, which linked the designers’ own heritage with the wealth of Japanese and Hawaiian influences in Kenzo’s closet.

Stemming from the denim line he launched in 1986, silhouettes came cut as head-to-toe topstitched denim in indigo and samurai red, wrapping in kimono dress shapes and reveling in the monochrome visual effect of double (and triple) denim. Bra tops and mini-shorts were paired, as were wide kicky jeans and roomy jackets with extra-long sleeves. Bamboo and jungle prints countered that expert simplicity of denim for denim’s sake, mixing up the latter half of the collection into a paint-by-numbers lineup of sporty neoprene shirts, swimwear, nylon anoraks and slub linen Hawaiian shirts all crawling with Kenzo’s tigers in the shade of tropical foliage. Though that total look may catch on with the kids, connoisseurs will enjoy the fine print: original ‘Flying Tiger’ logos and embroidered Hokusai waves came embroidered like souvenir patches on functional outerwear, backpacks, and bum bags alike. Their utility bent will bode well for the brand, balancing the trickier designs of their 'mainline' shows with a decidedly streetwear edge.