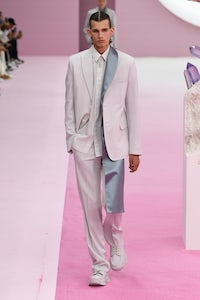 PARIS, France — Kim Jones knew Daniel Arsham was a kindred spirit after one visit to his studio. Jones’ respect for the past is the foundation of his artful curation, which can elevate even the most humble objects — a club flier, a 12-inch single, an old magazine — into cultural totems. Arsham’s art turns relics of contemporary life – a camera, a Walkman, a toy — into archeological objects. Jones imagines what his clothes might look like in an exhibition in 50 years. Arsham goes further ahead, a hundred, a thousand years. But, of course, they’re both working in the here and now, so that’s the only place where we can find their projections. For now, at least.

And that was the peculiar thrill of the Dior collection on Friday. Obviously we were looking forward to Spring 2020, but it was also almost as though we were looking back at an artist’s recreation of it from some distant time and place, maybe the desert planet Rakis from “Dune.” Arsham certainly boosted that notion when he spelled out a monumental D-I-O-R down the pink sand catwalk, the letters eroded like ancient monoliths in a sci-fi desert. Exactly halfway through the show, a Fremen teleported off Rakis and onto the Dior runway, a nomad swathed in pink.

Jones and Arsham were able to plant such images because they worked together from the very start of the collection, the clothes and the set (and the sand) coming together in one coherent whole. The footwear was transparent rubber casts of the shoes Arsham wears in his studio. The long, unstructured coats were based on the white coats Arsham wears at work, the same ones worn by the Dior artisans in their studio.

The transfiguration of such functional items into fashion statements echoed the process by which common newsprint became one of John Galliano’s signatures at Dior. Jones revived it. “Galliano is a massive influence on me,” he declared. He reanimated another iconic element from Dior Past with the ombré-ed sash that coiled round a jacket and trailed away on the sand, as lavish as the wrap on a Dior-clad Dovima when she posed with circus elephants for Richard Avedon in 1955 (quite possibly the most famous fashion image of all time).

One of Jones’s greatest assets is his ability to draw such rare, precious and beautiful associations into the industrialised world of ready-to-wear. In a collection whose primary focus was classic, beautiful tailoring, and artful twists there-on, Jones broke the mould with flourishes as fragile as the fans of minutely plissé-ed georgette in cobalt blue or orange which decorated a handful of monochrome white looks. Another highpoint was the toile de jouy handpainted by kimono craftsmen in Kyoto. The breathtaking exquisiteness of these techniques was grounded by Jones using them on a plain old t-shirt (ok, it was organza) or shirt-and-shorts combination. That is the balance he needs to strike between his clientele and his love of couture craft. But it was also those pieces which clarified what he meant about the clothes that would be shown in exhibitions in 50 years.

Then there were the artifacts, the accessories. The aluminium of the bags produced in collaboration with Rimowa was anodised to a sci-fi shimmer. Arsham had created a new collectible to join the Kaws dolls and the metal Hajime Sorayama saddle bag from Jones’ last two collections. His version of the saddle bag was 3D-printed, bone white and studded with crystals, like something shaped and smoothed by millennia of geological activity. You imagine he was imagining someone like him — or Kim — trying to make sense of it in another millennium or two. And that was the piquant grace note of this captivating presentation.