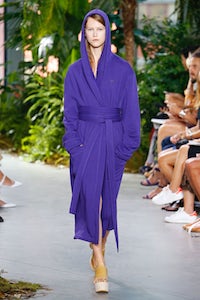 NEW YORK, United States — Lacoste's roots are in athleticism, and Felipe Oliveira Baptista began his career in the company by honouring that pure sportswear legacy. But he's increasingly brought his own idea of physicality to the brand. There's a difference. One of the fantasies that infused his latest collection was an imaginary tennis match on the rooftop of the Villa Malaparte, a controversial classic of modernist architecture on the island of Capri.

The other fantasy was Brigitte Bardot, indolently sunbathing naked on that same rooftop while she filmed Contempt for Jean Luc Godard in 1963. Athletic and physical, see? Bardot wrapped in a towel or a terrycloth bathrobe was the sensual inspiratrice for big, beachy, hooded robes, waist-wrapped for the women, hanging loose, Rocky-like, for the men.

Either way, it was all about an oversize-me, slouchy attitude update. There were moments when it got away from Baptista. The boy who wore the knit cardigan coat over knit Bermudas had a very baggy ass in his future. But the designer mostly maintained discipline by making a feature of the waist. Pants had the pull-on ease of elasticated midriffs. Julia Nobis’s full-skirted trench coat and Mica Arganaraz’s polo-shirt-dress were cinched for added flare.

The set could have been a palm garden on Capri, but, even at their sportiest, the clothes had a casual urban quality. The Lacoste croc, for instance, was roughly graffiti-ed over abstract colour blocking. It looked (late period) Warhol-worthy on a jumpsuit that was as easy as painter’s overalls.

Baptista’s real coup, however, was his referencing of another artist, the American Neo-Dadaist Richard Jackson. The best piece in the show was a plain white tank dress bisected with athletic stripes embossed with oozes of colour. It was the most striking expression to date of Baptista’s ability to twist the simplest, sportiest little look into something with a distinctly adult allure.