Business is booming, and this collection showed why: seriousness of purpose and commitment delivered with the lightest of touches and a sense of humour. 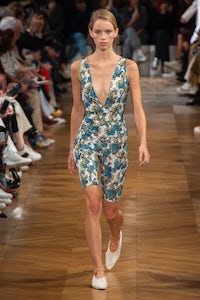 Business is booming, and this collection showed why: seriousness of purpose and commitment delivered with the lightest of touches and a sense of humour.

PARIS, France — The separation is official, the divorce isn’t quite final, but Stella McCartney’s show on Monday was a pretty good glimpse of what life post-Kering will look like for her and us. It’s very similar to what came before. But why should independence make her change anything, just because she’s now completely in charge of her own destiny? Business is booming, and this collection showed why: laser focus, seriousness of purpose and commitment delivered with the lightest of touches and a sense of humour. McCartney’s invitation was a comic book covering her adventures in Paris raising the consciousness of a bratty schoolgirl called Minnie the Minx. Seat numbers were on a sticker on the cover.

McCartney’s career in fashion has been so fulsomely documented that it doesn’t need a retread. But it’s always a pleasure to see her Savile Row training rear its head in her tailoring, especially since she launched her menswear. The women’s suits she showed on Monday were relaxed, over-sized. “Boyfriend blazers" cued the show notes. And the boyfriends were on the catwalk in those very same suits. The same floral wallpaper pattern showed up on men’s shirts and a couple of neoprene one-pieces for women.

It’s nowhere near “gender fluidity”, but it was the latest expression of McCartney’s habit of rotating a handful of ideas through her shows, changing the colour or the silhouette. It can make for a repetitive presentation (soundtrack-ist Tony Farsides managed to up the ante a little on Tuesday) but it’s always an object lesson in options. Here, for instance, the tie-dye that was the bold new addition to McCartney’s visual lexicon showed up as a t-shirt, cargo and baggy track pants, and a rather starry jumpsuit. Each of those items also appeared undyed.

The collection’s other conceit was the zipper. It ran up and down trouser legs for both men and women, allowing a degree of customization. Nice with the tie-dye. There were also zippers on a lacy slip dress, a reminder that McCartney has always had a sweetly saucy streak. It’s part of the full service she offers her customers. And it'll mean more money in the bank.