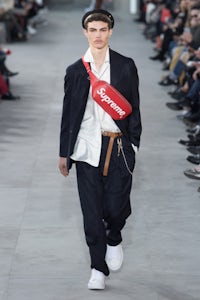 PARIS, France — Kim Jones, obsessive cultural archeologist, outdid himself with the men’s collection he showed for Louis Vuitton on Thursday afternoon. He exhumed the spirit of a protean era in New York, one that spanned the end of the 1970s to the beginning of the 1990s, when uptown and downtown, art, fashion and music came together at night in Dionysian defiance of harsh reality. And Jones joined in his celebration with the label Supreme, “because,” he said, “no conversation about New York menswear is complete without Supreme.”

Louis Vuitton X Supreme: integrating one of the world’s greatest street brands and one of its biggest luxury houses was the sort of challenge Jones was put on the planet to meet. He’s a long-time connoisseur of cults, and there are few labels cult-ier than Supreme. If there were moments of supernal luxe — like the shearling coat laser-trimmed to a plush pile, or the tiedyed ponyskin, or the shearling-lined croc blouson, which had the style of the street but the substance of altogether another urban stratum — the dominant mood in the collection was much sportier, more casual than before. Younger, actually, and not just thanks to the in-the-end subtle presence of Supreme (though the signature red did insinuate itself in ways that had the audience stirring. A Louis Vuitton X Supreme case for your skateboard? Well, all right.) Jones has just been in Beijing, and he was struck by how much younger and cooler the customers for Vuitton menswear have become.

Jones has just been in Beijing, and he was struck by how much younger and cooler the customers for Vuitton menswear have become.

This was undoubtedly a collection for them, but, at the same time, its accessibility jumped generations. Jones was thinking about the way Jean Michel Basquiat splashed his cash on expensive stuff but wore it in a deliberately careless, disheveled way: big coats over unstructured tailoring, flapping shirt-tails, sloppy knits, floppy pants. Helped by fabulous styling, the look was louche, lived-in, which gave it a much warmer edge over the buttoned-up, occasionally chilly polish of LV’s men’s collections in the past. It certainly helped that Jones had such vivid characters in mind when he was designing. He imagined Keith Haring, for instance, in a denim baseball shirt, or Julian Schnabel in an oversized smock.

Because DJ culture is one of Jones’s biggest obsessions — and because nightclubs were the nexus of New York society during the years in question — the collection had a strong clubby spine. You could picture the silk prints from the LV archive queuing outside 54 or Regine’s in the late 1970s, or the kid in the slouchy flannel suit propping up the bar at the Mudd Club. The bag of bags in this collection was a case designed for carrying a Technics 1210 turntable. And Honey Dijon’s Strictly Rhythm soundtrack was a reminder of an era whose fierce timelessness has way more dividends to yield for aficionados like Kim Jones.