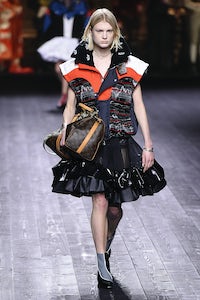 PARIS, France — Time is crucial to fashion, but it’s never been as hotly debated as it is today. It will also be the topic of the Metropolitan Museum of Art's next Costume Institute exhibition (co-sponsored by Louis Vuitton). Stretching the idea of the journey that is integral to Vuitton’s luggage heritage, designer Nicolas Ghesquière went time traveling again with his runway show this season, mashing up a series of far-flung eras in a kind of temporal conflict. The concept was served up as a challenging rumination on style (with a heavy dose of styling) but also something that’s relevant to all aspects of life in a digital culture that is constantly rewriting the very idea of time in an endless flattening of past, present and future.

This being Vuitton, the spectacle was truly spectacular. The soundtrack to the show — entitled Three Hundred and Twenty, composed by Woodkid and Bryce Dessner and culled from the work of Bach contemporary Nicolas de Grigny — was performed live by a chorus of 200 characters, dressed by multiple Oscar-winning costume designer Milena Canonero in styles ranging from the 15th century to the 1950s. The chorus was the backdrop to the show, but delivered a vision so magnificent, it swallowed the rest.

Ghesquière’s clothes delivered a clash of styles that he labelled “the anti-total look.” And, on paper, it was a wonderful idea: mixing a petticoat with a windbreaker, a teddy boy jacket with motorcycle pants, all done in the graphic shapes that Ghesquière masters. The problem with Vuitton is that on the catwalk everything is far too controlled, too fastidiously put together and the result ultimately feels contrived, which is the exact opposite of “anti-total look.” In the end, the lack of spontaneity dampened what was a brilliant intuition. Letting things go would be a wonderful way to accept the clashes and contradictions of time. And those of life, for that matter.