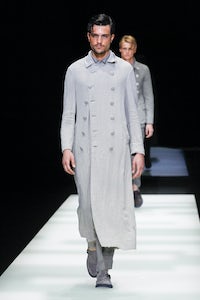 MILAN, Italy — Giorgio Armani usually offers some kind of written manifesto but this season he dispensed with it so that, according to a spokesperson, commentators would be compelled to trust to their own guideline-free opinions. But he wasn’t really cutting us loose, because the collection he showed stayed pretty close to his own tried-and-true aesthetic.

“Made in Armani” announced the rubric projected on the screen at the back of the runway. Sui generis. That solipsistic declaration encapsulated a pretty accurate index of Armani’s strengths. Weaknesses too. An aversion to editing, for instance. And an almost invisible plastic visor offered the kind of peculiar anomaly that Armani has proved himself partial to in the past.

What looked wonderful was all the washed, faded, fluid pieces, like the double-breasted linen duster that opened the show. Cherished items from the wardrobe of a neo-realist working class hero. Sand and greige and a worn grey/blue were the shades that loaned themselves best to this conceit. And Armani’s hero likes a classic jacket with three buttons for spring.

Japan has been a stalwart inspiration for the designer. If there was the merest suggestion of samurai in his Emporio collection the other day, for his signature line it felt like he’d been looking at the textures and tones of Japanese paper, using its infinite variety as a starting point for fabrics that crinkled and/or shone. The repetitive nature of Armani’s presentations often obscures the appealing languor of his clothes. There were moments here when you wished you could freeze the frame and reflect a little longer on the soft curve of a jacket or the softly tapering drape of a pair of trousers. Sometimes too much is simply that.

He brought the curtain down on six white outfits, seersucker, pique and more. They followed a sequence of navy looks that were more his tradition. Maybe Armani was imagining what the world needs now is some spiritual uplift. In that, he would be absolutely right. And I didn’t need his show notes to call it.