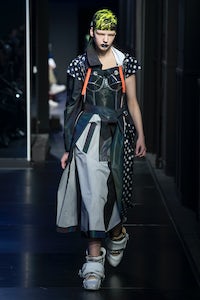 PARIS, France — It was allegedly said in the olden days that haute couture was so beautifully made you could turn it inside out and wear it. An interest in the inner life of garments has shaped the personality of the house of Margiela. And, with his latest show for Maison Margiela Artisanal, John Galliano’s goal was to utilise technology to reveal the layers within layers, the ghosts within garments. All we had to do was flash our phones at the clothes as they zoomed past. Obviously – fortunately – it worked for some people so there is a visual record of the eerily beautiful result. Unfortunately, the models moved so fast and my flash was so slow I ended up with a dozen photos of a beautifully illuminated wall. Which maybe makes an interesting point about the gap between the eye, the hand and the gadget. Slow down and beauty shows itself. Humanity still rules.

It always did at Margiela. And Galliano’s extravagant de- and re-constructions continue the tradition. There is so much life in his clothes, so much, in fact, that he had to collage day and night together and then gloss them with another dimension of time and space: trench coat zipped to dress lining, ski jacket bonded to bronze lamé, a coat in tweed chiffon co-opted by the skeleton of a trench. The comparison that springs to mind most immediately is the recent "Bladerunner" sequel. In the future, the familiar is – then it isn’t. The Bladerunners Deckard and ‘K’ had Sinatra and Elvis performing in degraded hologram. Elvis was on Galliano’s soundtrack too, along with Roy Orbison and Nancy Sinatra.

It felt like Artisanal came together with last week's men’s collection, Galliano’s first for Margiela. The idea of “dressing in haste” was fundamental to both. There was the same languid double-breasted suit, the same rubberised Aran knits. The combat jacket in clear polyurethane was a cousin of the Biggles helmets the boys wore. And Galliano’s décortique technique was in full effect in both collections. It’s like an elephant’s graveyard of sportswear, the bones of old clothes making new shapes. Hair and makeup were devastating/devastated accessories. The sense of cultural detritus left a lingering odour (and that’s "Bladerunner" again). But that has always been a fascination of Galliano’s – the forgotten and forbidden corners of human experience. There was a beautiful analogy here in the outfits that sheathed opium den chinoiserie in polyurethane, keeping it fresh for an uncertain future.