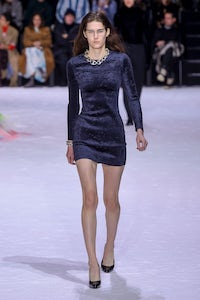 PARIS, France — “Now I only do two shows a year, I can make mountains,” said Demna Gvasalia yesterday. So that’s what he did, creating a huge graffiti-ed mass for his Balenciaga backdrop that looked just like LA’s famous Salvation Mountain, a monument of outsider art. Gvasalia is the outsider who came in from the indie cold, to helm a mainstream brand that is as resonant as any other in fashion. He said this was his season to clearly define his vision, and his relationship to the house. He did it with an act of supreme logic, by going back to ground zero. The body, in other words, limned by a second skin of black micro-dress. After that opening outfit, Gvasalia piled on the layers throughout the show, like a matryoshka in reverse, until the last looks, half a dozen hoodies, parkas, coats stacked “to the maximum volume that represents Balenciaga”, he said. The final effect was almost as though you were wearing your whole wardrobe. Yes, Gvasalia did have refugees on his mind. But the technical feat of making so much volume look so manageable was equally in the vein of the grandmaster Cristobal Balenciaga himself.

That catwalk mountain was all about snowboarders, according to Gvasalia. He showed a slew of lumberjack shirts and denim jackets and logo-ed merch that looked like the garb of off-duty snow jockeys, except that the logo was the WFP’s, the World Food Programme, “Saving Lives, Changing Lives”. Connecting with the very real world, donating a quarter of a million dollars to WFP, putting the corporate money where its mouth is: easy to see how that translates to Gvasalia’s hyper-engaged constituency. At the same time, he created the identity for a fictional boyband Speedhunters. Incorporated tour merchandise for them into the collection. The dialogue between authenticity and irony was quintessential Gvasalia.

So was the shamelessness, the kitsch. Here, the tote with the winsome puppy, the cowboy fringes, the garish florals, the swaddling bandage dresses. The knife-pleated skirt with the fuzzy sweater! In someone’s book, that’s a fetish look. It also testified to Gvasalia’s extreme good humour. He has a refreshingly imperturbable point of view, and he will only find more interesting ways to exercise it if his backstage comments were any indication. Queried about the haute bourgeois element – including the searingly precise jackets and coats with their exaggerated hips – Gvasalia said the notion of the bourgeoisie was dated. “It’s more an attitude, an intellectual value.” But he was intrigued by their viciousness. I scent a new collection.