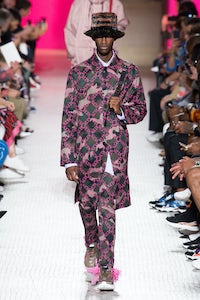 PARIS, France — Pierpaolo Piccioli is the man who is charged with piloting Valentino, erstwhile icon of exclusivity, into a future where inclusivity is the clarion call, and he certainly sounds like a guy who’s making the necessary adjustments, ticking the right boxes, dropping the right names.

He is enthused by the influence of trap music on fashion. Even a year ago, I couldn’t have imagined sitting with Piccioli while he sang the praises of Syd tha Kyd or Kid Cudi. You can blame his kids for the change. Now he’s gone so far as to bead Kid’s spirit animal – a gorilla – on a hoodie. (For the record, Syd’s is a peacock.) “This brand used to express a lifestyle, now it expresses life,” he declared during a pre-show preview.

There’s a clear and present danger in that, bandwagon-jumping and all, especially when Piccioli seemed more excited by Troye Sivan’s “Bloom” video, in which the singer is wearing pieces from Valentino’s stunning spring couture collection. Which suggested itself as a better fit with the innately extravagant Valentino ethos. Except that Piccioli is resolved to change all that.

In the men’s collection he showed on Wednesday, his earnest effort to turn the switch – exclusive to inclusive – was obvious. You could start with the soundtrack – Kids See Ghosts and Nas backed up against a Viennese waltz and atmospheric electronica.

In the clothes, the transition was transparent in the accessibility – the recognisability - of the looks: parkas and anoraks, turned-up jeans, sneakers and bucket hats, and oversize everything. Sportswear as we know it. But Piccioli was also talking about “a new couture”, and that’s where the collection really took on its own curious life. It was most visible in the ruff of ostrich feathers clipped onto sneakers, an appealingly silly little flourish that you only wish might catch on with frontline sneakerheads.

More substantial were the multi-coloured wings that wrapped the shoulders of a trench coat (inspired by the wings of an angel in a Fra Angelico painting, said the designer), or the butterfly that sprawled across the back of an MA1 jacket, or the beautifully beaded army parka. Piccioli called it "manipulating classics". He exhumed early 1970s scarf prints from the archives to pattern track suits and parkas. He overlaid some of them with logofied grids, like a bootlegger would, he insisted. (Not sure about that.) But he made his point – old and new, old and young, male and female too.

There were women wearing Piccioli’s menswear on his catwalk, his acknowledgment of the new fluidity of his clientele. Still, either way, it was the special pieces, the pieces that celebrated the craftsmanship of one of the best ateliers in fashion, that struck a chord. And that ain’t trap.