This season's editions once again showed why. Of the six names on display (three in MAN, three more in FashionEast), a couple were returnees, but a couple more were just days off the MA graduate catwalk at the Royal College of Art. Edges don’t get much more bleeding than that. 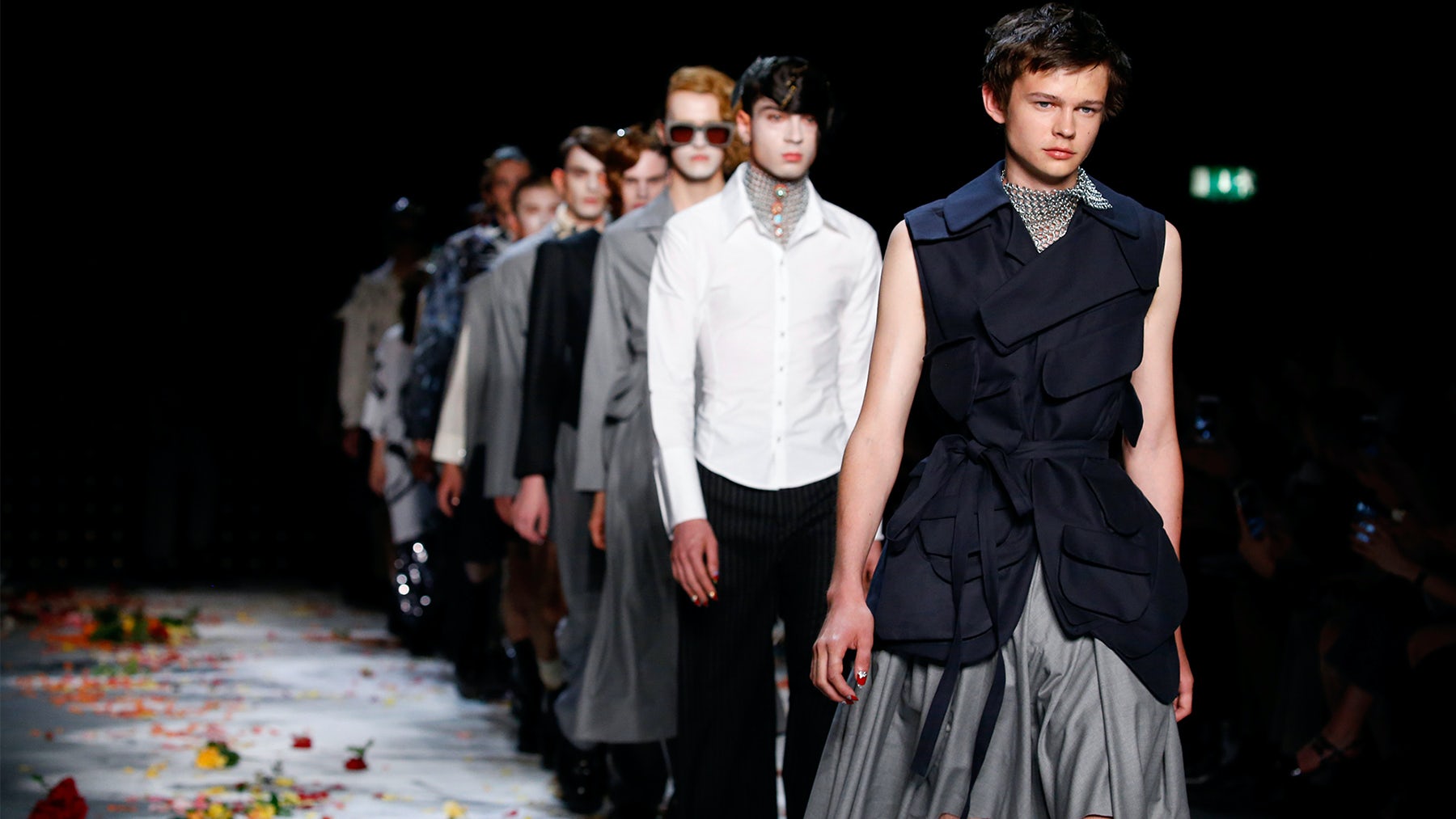 Of the returnees, key arbiters already anoint MAN’s Charles Jeffrey as a standard-bearer for the delirious, historicised extravagance that spawned the likes of Galliano and McQueen. (And like them, he’s a Central Saint Martin’s alum.) “Iconic couture, Louis XIV and grandeur,” were the launchpads for Jeffrey’s collection, staged on a catwalk covered with sand and roses.

Picture a pin-striper in a variation of Dior’s New Look. Or a boy corseted like a cancan-ing chorine. Or a priest in turquoise leather. Fey? For sure. But there’s a craft and a sense of ceremony that promises something much more substantial to come. 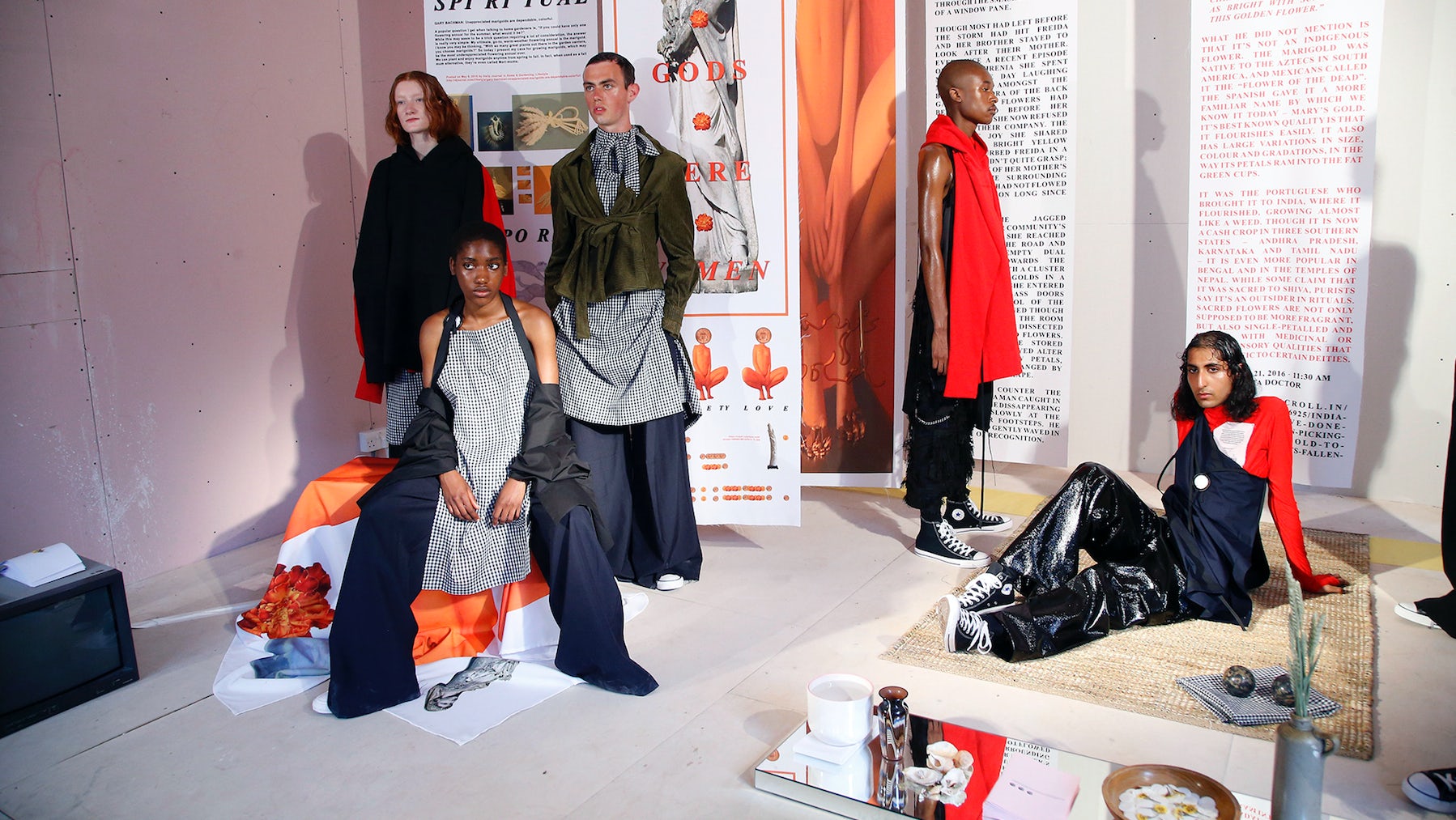 The other returnee Rory Parnell Mooney hasn’t quite mastered that. His presentation at Fashion East was an ode to Berlin, a city where creativity thrives on a shoestring, much like his own.

The red, white and black colour palette harked back to a time when Berlin wasn't quite so free and easy, the languid silhouettes and volumes — and the tableau vivant  — went back even further, to decadent Weimar. The obfuscatory footnotes that accompanied the clothes underlined the fashion student-y vibe. No clarification too obtuse for this young man. 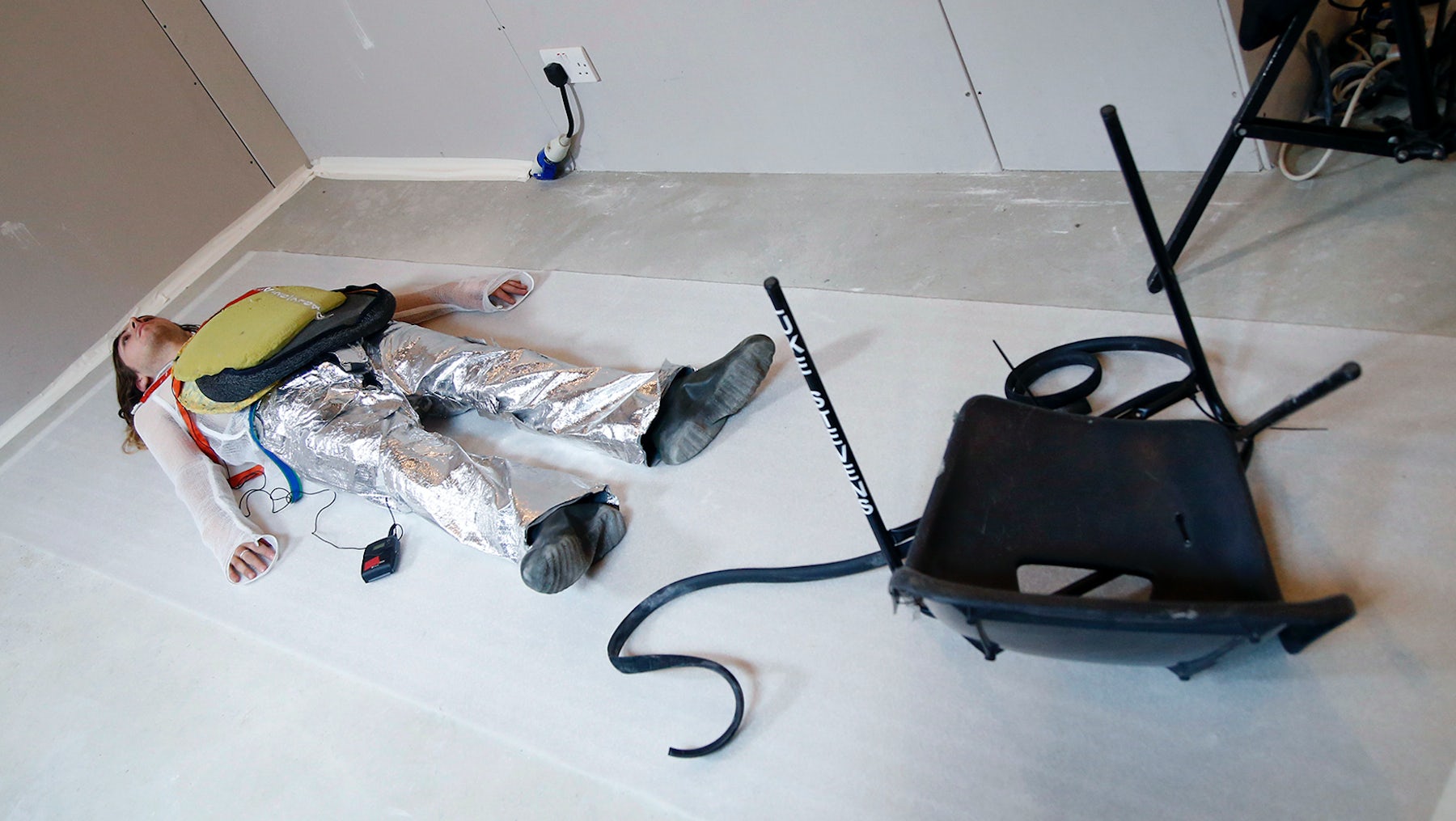 Nor, indeed, for Luke Stevens who, until two days ago, actually was a fashion student, at the RCA. He was presenting his graduate collection at Fashion East, and it too was ideas-heavy.  Its components — mylar blankets, scaffolding net, IKEA catalogue codes, plastic bucket chairs! — were the easily-ignored stuff of the everyday, as were the items Stevens created from them: jeans, a tracksuit, sweatshirts, bombers.

“An investigation of clothing,” he called it. In one sense, it was the purest acknowledgement of fashion as alchemy. Here's how to elevate mylar (the stuff Stevens' dad wraps himself in when he's been running) by turning it into a silver jacket. But watching Stevens delicately manoeuvre himself into the mylar, fearful of tears, suggested that theory has yet to become practice. 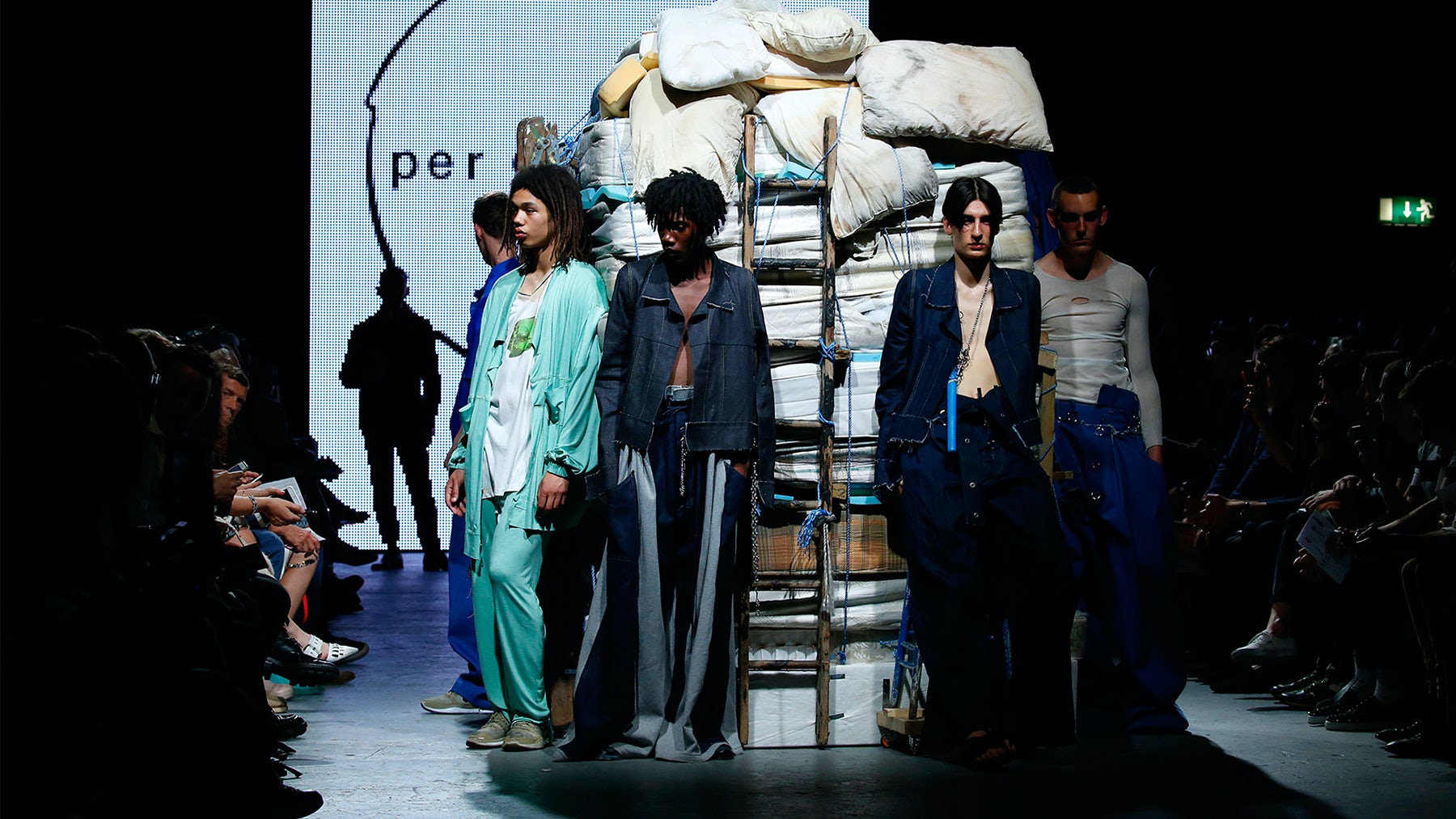 Per Götesson, the other RCA grad, was less theoretical, but he was also very taken with the ordinary. He transformed denim by shrinking jean jackets to doll size, and exploding pants to Brobdingnagian proportions, then dangling a bunch of stuff off them: key rings, ring pulls, a toothbrush somewhere in there. Without actually looking like anything Craig Green has ever done, there was a similar reassessment of staple workwear going on. Same with Feng Chen Wang, the other MAN designer. Dissected utility, tucked and tied, t-shirts re-purposed, fabric gathered into strange new shapes…again, a flicker of Green. 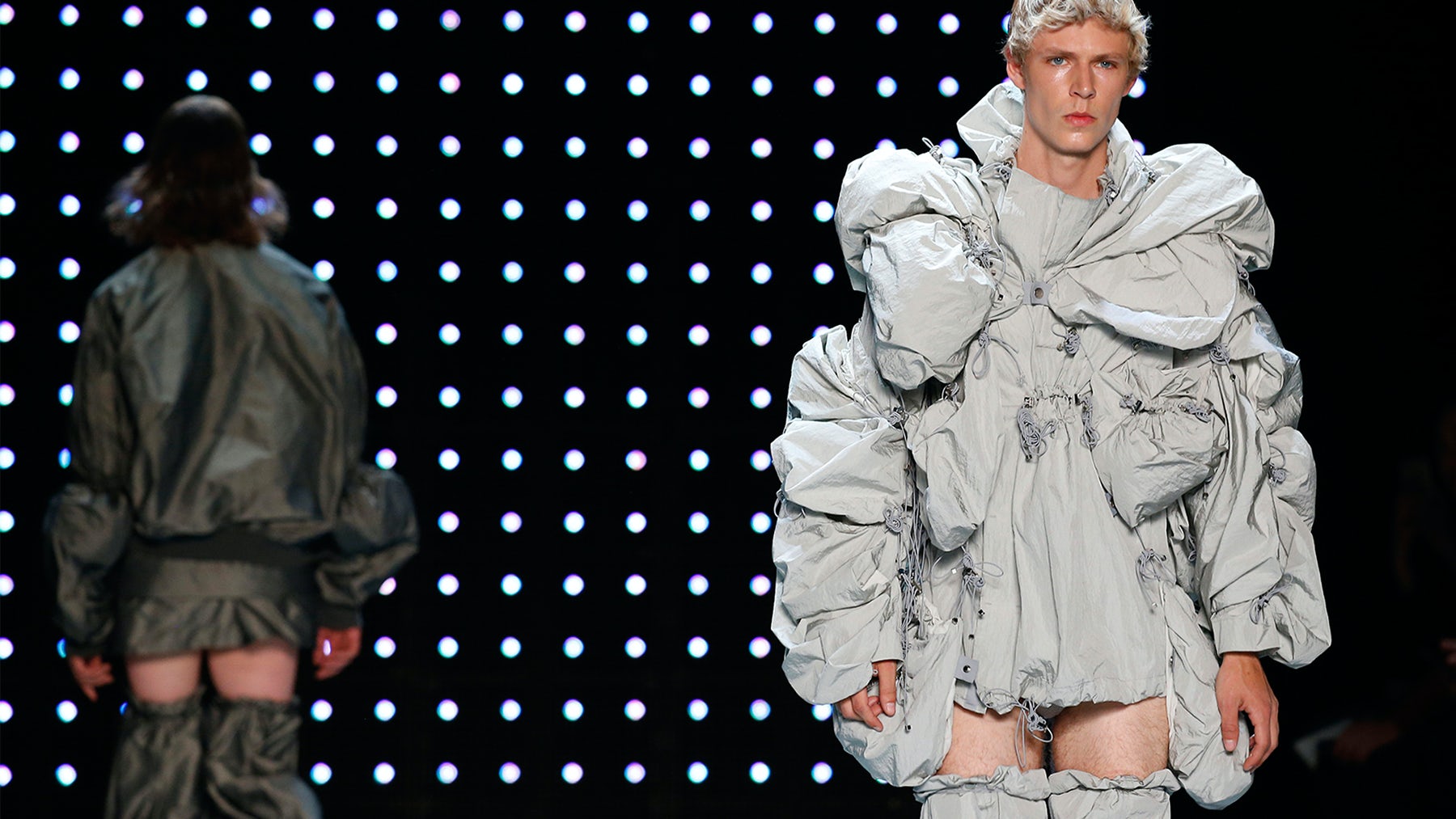 There was no such issue with Rottingdean Bazaar, the coming together of Central St Martin's grads James Theseus Buck (print) and Luke Brooks (knitwear) on a project devoted, like Stevens and Götesson’s, to the apotheosis of the ordinary. The duo sealed a pot pourri of found objects — everything from balloons and fruit-flavoured condoms to flower petals and human hair — onto items of clothing to joyful, surprising, funny and desirable effect. And not remotely hi-falutin'.  "Can we make things that are really amazing that can compete with the high street?" Buck wondered. 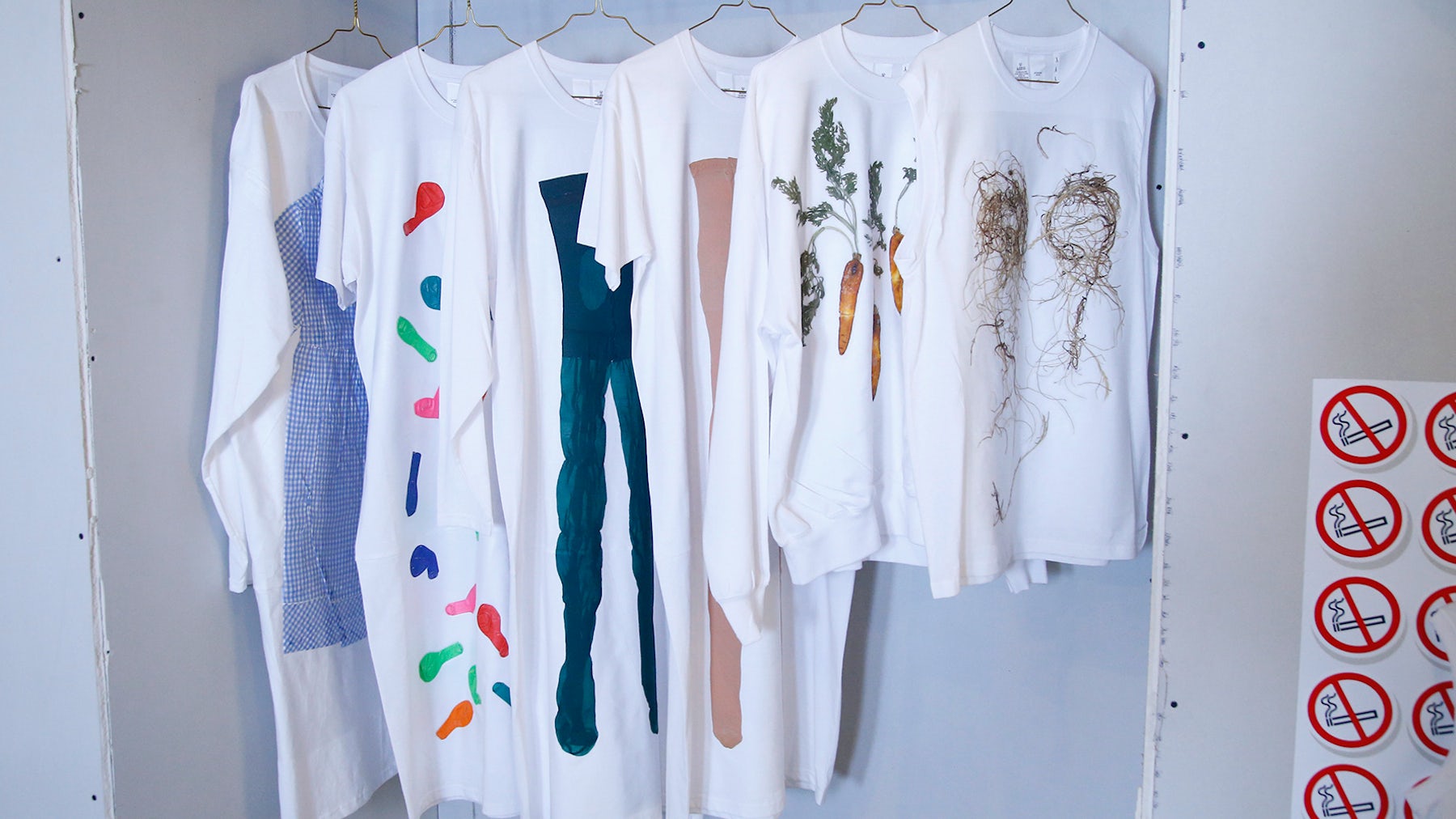 A sweatshirt embossed with hotel slippers, another with a bra artfully crocheted and needlepunched across its chest said YES! And the flower petal pieces betrayed a commitment to craft that helps mark Rottingdean Bazaar as this season's new sensation. (That unappetising moniker is, by the way, the name of the seaside village where the boys live.)