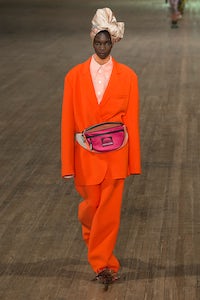 NEW YORK, United States— The tone of New York Fashion Week was nostalgic, or at least, there was a sense of designers looking in the rearview mirror. No wonder. As the writer wrote, the past is another country, and if they did things differently there, it might offer some kind of escape route from the peculiar present. It was appropriate that Marc Jacobs, the King of New York, should close the week with a collection he called “the re-imagining of seasons past somewhere beyond the urban landscape of New York City”.

That “somewhere” was a florid state of mind, an adult toyland, a fantasia far, far away. And also, a definitive riposte on the designer’s part to the harsh commercial realities that have allegedly intruded on his business over the past year or so. Jacobs has never been anything but thrillingly engaged as a designer. Maybe this new collection was so polarising not because he was disengaging but because he was so clearly turning his back on reality. As in, reality is a concept. Who needs it? Not me!

In the normal state of affairs chez Jacobs, that could have been as thrilling as ever. Why it didn’t pan out quite that way was down to a perfect storm of subtexts. Much has already been made of the implications of Jacobs’s new no-set look, with the Park Avenue Armoury stripped to its barest bones. Last time, the audience was ranked in two mile-long rows down the centre of the building. Here, they were seated around the walls of the cavernous space (like the last Vetements situation) in such a way that the emptiness became the set. There was no music. Silence was the most appropriate soundtrack for that environment.

So emptiness, silence… quickly disrupted by a gaudy parade of be-turbaned birds of paradise. Jacobs has long been one of fashion’s most ardent magpies, and a fanboy too. There were nods to Yves Saint Laurent, and Miuccia Prada and Jean Paul Gaultier, two of YSL’s most influential acolytes, alongside echoes of Jacobs’s own filtering of those influences, and updates of his mutant takes on the factions that have shaped New York style over the past century, everything from Harlem ballgoers to Lily Pulitzer princesses. Everything — colours, patterns, proportions — was exaggerated to the nth, as though that was the only way the clothes would read in the Armoury.

The extraordinary dissonance between the context and the clothes was unsettling, in a last-gasp way. Jacobs dropped words like “decadent” and “exotic” into his shownotes. They definitely applied, but it wasn’t decadence as the term is usually, loosely tossed around in fashion. It actually felt like dictionary-definition “realness” as in “moral or cultural decline as characterised by excessive indulgence in pleasure or luxury”. I don’t want that from my Marc Jacobs. I want him happy. Uplift, not decline. Because nobody does that better.