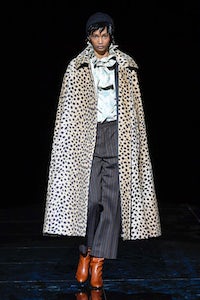 Of course, it’s not that Marc Jacobs really ever went away, but in the years since his brand’s financial health has declined, his collections have become increasingly abstract. A spectacle to behold, perhaps, but not one to hold on to.

That was all turned upside tonight in a pitch-black Park Avenue Armory. The crowd was quite contained, and despite there being two showings, many of those who are typically invited were turned away. The seating, upgraded to stools with pillows rather than the bare folding chairs of recent seasons, hinted that something had changed.

Orchestra music thundered overhead, a single spotlight shining down on a single model dressed in a leopard-print cape coat, with a ruffled blouse and slim trousers peeking out from underneath. Actual, desirable clothes. Fanstastical, but not a fantasy. What came next were a series of exaggerated a-line house dresses and house coats in curtain florals and Sylvia Plath-era wool checks, worn with boots so roughed up the colour of the leather was worn off in some places. (You could almost see these ladies wandering around a corner market, shopping basket in hand, aimlessly reaching for a pint of milk.)

Soon, it was time for dreaming in a simple mint-green wool slip, or a glossed-over moiré gown, or a leopard-print top coat made of what looked like roughly-cut fur, with mounds of black feathers wrapped around the neck.

He used all the right models: Guinevere Van Seenus in curled duchess satin; Adut Akech, a queen in chartreuse; Christy Turlington as the black swan. There were ghosts of past collections, but little nostalgia. Instead, it was melancholy. And a feeling of gratefulness that you could see him, the person, in the clothes once again.

Some of the women wore fuzzy, girlish mohair beanies, others wore wool caps stabbed with feathers. Those became increasingly elaborate as the clothes scaled, with several covered entirely in plumes. The idiom “a feather in one’s cap” can be traced back to the tradition of warriors adding a feather in their headgear for every victory — or enemy slain. Perhaps Jacobs was killings his demons, one by one.