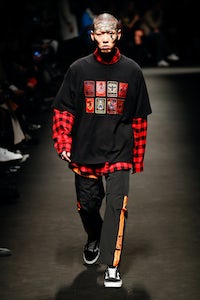 MILAN, Italy — Marcelo Burlon, former king of Milanese nights, reality TV star, protagonist of the recently released documentary Uninvited (of which he is the subject and the star) and, of course, designer, or something close, is quite a divisive character. People either detest him and loathe his rise to stardom, or love him. He is certainly good at self-promotion and knows how to pull together a gang. And he has the ability to catch something that’s in the air and push it.

The County of Milan show today was a case in point. The fashion was quite basic: pure unadulterated streetwear for the metropolitan street gangs who favour swag and a certain fierceness, and like their clothing clean in lines and bold in graphics. The tarot card/horror movie seasonal theme was a tad Gucci but the reference disappeared completely in the mix.

What made the biggest impression was Burlon’s wonderful cast of serious misfits. It lifted the whole endeavour to cinematic heights. As for the collection, it added little to the proceedings. Burlon’s recipe needs a little refresh at this point. Not a big one, just a tweak before it gets boring. And Marcelo Burlon knows how to do that.