The designer's work has been too ladylike in the past, but this collection reflected a welcome change in a softer direction. 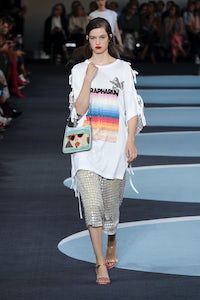 The designer's work has been too ladylike in the past, but this collection reflected a welcome change in a softer direction.

MILAN, Italy — There was an unmistakable Italian summer vibe to the Marco de Vincenzo show today that non-Italian viewers might not have detected. It recalled memories forged between the late 1970s and the mid-1990s, when summers were all about crazy parties, open-air cinemas and dressing up with whatever one found in the summer house. De Vincenzo conjured up that feeling, scavenging his Sicilian memories (he hails from Messina). In fashion, Sicily can be a big, bold folk cliché, but that's not the Sicily de Vincenzo was after, even though he splashed glittery Trinacrias — the three-legged symbol of the island — here and there.

Instead, he went feisty, Seventies and pop, mixing silk blouses and loose knits, glittery flares and net t-shirts. The movie posters, meanwhile, turned into embroidered bags. De Vincenzo has been a bit too ladylike and dressy in the past. This collection marked a welcome change in a softer direction, which will make things easier to appreciate for a younger public. Still, he is a master when it comes to colour and intensely worked fabrications. Psychedelia is emerging as a key trend in Milan, maybe as a reaction to the grim times in which we are living. De Vincenzo delivered a catchy, convincing take.