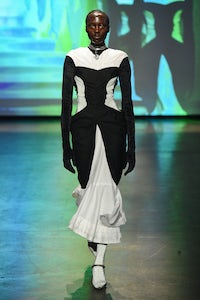 PARIS, France — Last season’s post-apocalyptic vision took on a more optimistic slant in Marine Serre’s new collection. In her latest scenario, inspired by Frank Herbert’s “Dune,” human beings have evolved beyond our comprehension and now travel freely across the multiverse using a mysterious power called Mélange, the ability to absorb endless possibilities. But there were a few terrestrial verities seeded through Serre’s concept. Her cosmic nomads still liked their environment decorated with old carpets, like their earthly brethren’s tents. And children still represented hope for the future. In the last passage of the show, models walked with their own kids. (Hannelore Knuts’s son Angelo was a little shy, so she carried him on her shoulders.)

There were also Serre’s own verities: volumes that float far from the body, bodysuits that cleave close, and the upcycling that is at the core of her business. The purity of repurposed white tablecloths contrasted with the animalism of jackets cut from faux-fur bedspreads. In the context of her story, patchworked velvets and Fair Isles, sculpted houndstooth and fringed brocade transmogrified into tunics suggested the ingenuity of off-planet cultures making do and mending, creating a new elegance out of faded, skewed memories of a distant past on Earth. Serre’s cosmic nomads were the aristocrats of an intergalactic hierarchy.

Another signature element in her collection were the facemasks. They are such an effortless accessory to any number of dystopian storylines, and Serre has used them as such in the past, but here, current events had caught up with her, which was no cause for celebration. Likewise, the booklet she distributed as her invitation included, among other bleak observations from Frank Herbert, this one: “There is no escape – we pay for the violence of our ancestors.” And yet, Serre’s show struck a surprisingly, maybe even perversely, upbeat chord, with a little help from a handful of children. Maybe this is what happens when you fully face your fears.