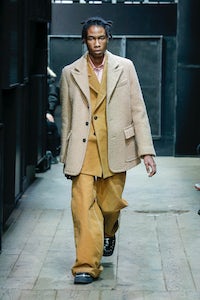 MILAN, Italy — The eerie sarcophagus of speakers that enveloped the Marni venue on Saturday afternoon bled a crackly antique recording of Debussy’s “Prélude à l'après-midi d'un faune” while Francesco Risso’s first models stepped out onto the catwalk. That music will forever be the soundtrack of Nijinsky’s most transgressive ballet, a record of the moment when a radical new vision slammed into the old world with such seismic force that the culture changed. Maybe it wasn’t such a stretch to imagine Risso hoping for the same thing with his collection.

He had in his mind that there was “an elephant in the room,” which he insisted no one was talking about. As tricky as it was to winkle out the core of what Risso meant, he seemed to be talking about the power of youth, cruel but fearless in its innocence, and yet denied by those he called "the puppet masters." Risso’s collection could therefore be cast as a confrontation between two tribes, those with power, those without. "The undefinable aliens mingle with the indefensible weirdos," was a stand-out line from Marni's typically dense but teasingly allusive manifesto for the season.

Risso interwove his parody of power-dressing — huge overcoats, exaggerated multi-tasselled loafers, “an army of conservative suits blown up” (his words) — with psychedelic pyjamas, manga shirts, paw-like gloves, and visual references to Bruno Bozzetto, the Italian animator whose subversive work qualified him as the anti-Disney. Perhaps you could construe the result as the most classic confrontation of Western civilisation, Apollo vs. Dionysus, with the battlefield as a single outfit lifted from a collection of menswear by Marni. That is one crazy elephant in any room.

For me, there was one particular piece that captured Risso’s uniquely screwy fashion vision. It was a diamond-patterned sweater, tattered in such a way it looked like an animal pattern was fighting to emerge, the beast within, perhaps. What really lies beneath? If humankind could ever answer that question, we might be able to free ourselves from the enduring quandary of our savagely flawed existence.