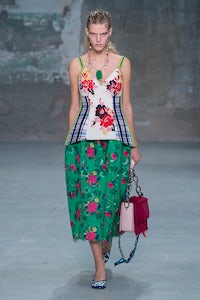 MILAN, Italy — If you include menswear and pre-fall, the collection Francisco Risso showed on Sunday morning was his fifth for Marni, and what’s become crystal clear is that you don’t spend all that time at Prada without learning how to spin the kind of yarn that encompasses worlds. Risso's was all about his dream of a girl on a skateboard surfing through a wardrobe of the ages, becoming laden with clothes from different eras as she went, couture structure mashed with flapper languor. It was the kind of cinematic trope that raised the roof in madcap chase scenes in silent movies (or even "The Naked Gun"), and it applied equally to the playful pile-up that Risso catapulted onto his catwalk.

He called his collection Treasure Hunt, describing it as “a game for adults”, comparing his woman to an archeologist examining her finds through a wide-angle lens to magnify the pieces. The clothes were BIG, classic couture shapes, waists, hips and full skirts, expanded to surreal proportions. “New Dada,” said Risso, referring to the movement that gleefully up-ended art world orthodoxy. And glee was the driving force that motivated his own dissection of design. It was almost as though in his own furious scavenging through trunks of clothing, he hadn’t had time to complete anything. hems and seams were unfinished, toiles and fabrics pieced together pell-mell, pearls and shiny things and faces by artist David Salle applied as decoration. There was discipline in the overpieces, like old-school one-piece bathing suits, that held volumes in check, but Risso was more engaged by chaos. That’s where he said he found real beauty: “Between cacophony and charm”. There was plenty of both in the collection. And if Risso put Marni on spin cycle, you couldn’t imagine anyone but Frederic Sanchez supplying the overpowering aural complement: he sent a crazy mash-up of the Cramps’ rockabilly, Yma Sumac’s pagan shrieks and Joe Meek’s extra-terrestrial twang racing around the room in a mind-boggling 360-degree rampage. It was the season's finest cacophony.