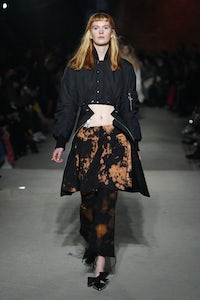 LONDON, United Kingdom — For some, social media can be a place of longing and lusting, endlessly scrolling through picture-perfect images of aspirational lifestyle scenarios. For Marta Marques and Paulo Almeida, it’s the exact opposite: a place to find their so-called “MA girls” — the young women whose style they follow and admire from afar. For their latest collection, they started by looking at Instagram and finding those girls so that they could invite them into their world IRL and put together a collection that celebrates them.

Buffalo boots, motorcycle jackets, cargo pants, Victoriana frills, corset bustiers, Beetlejuice stripes and slim-fitting cut-out velvet were put through the MA blender and worn with aplomb by the diverse women who were so central to the designers’ process. It came out with a sense of grandeur in the everyday — couture shapes and touches in a streetwear wardrobe. As a result, the clothes looked completely at home on the women wearing them.

The Portuguese couple’s formula is one that makes sense and more designers could benefit from: to bring the women who actually want to wear the clothes into the frame. Almeida pointed out that he’s always found it a bit odd that fashion houses use teenage girls to sell luxury items to much older women. Why not just represent women who you want to attract?

Photographic prints also took centre stage on several looks with slogans like “Truth and Beauty” and “Power Women” printed across them, reiterating the message of female-friendly fashion. They were a collaboration with Louise Gray, the Scottish designer who once had her own label and now teaches at Central Saint Martins. Marta and Paulo met Gray during their studies at the school. It may sound simple when they put it like that — but it’s an inherently collaborative approach that sets these two designers apart.