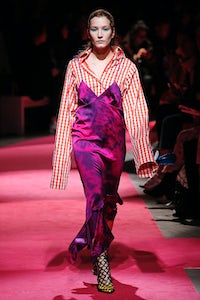 LONDON, United Kingdom — Marta Marques and Paulo Almeida have made the most of the year since they won the LVMH Prize. "More time to design, more time to develop," said Marques after their presentation on Tuesday. It showed.

The raw, oversized denims with which the duo made their mark were less in evidence (though what remained was still the strongest stuff in the lineup). Instead, they focused on a more complete wardrobe in an effort to answer this question: what would you expect to find in the MA girl's closet? And they had a full coterie of their friends to fall back on. "Normal girls," Almeida called them. A lot of them walked in the show, all types and shapes, a regular catwalk collage.

"The collection is like a collage too," said Marques, reflecting the direction the designers took from their tribe. Some of their friends liked asymmetric slip dresses over huge checked blouses, some liked little shift dresses covered with netting, others went for a sweatshirt over a ruffled skirt, or cha-cha pants and a yellow leather jacket trimmed in shearling. Ruffles were a thing, a nod to the designers' Latin roots. Huge eiderdown jackets were something else altogether.

A little ‎bit of this, a little bit of that, different strokes for different folks: Marques'Almeida imagined a tumble of clothes falling out of that mystery closet when the door was opened. The chaos carried over onto the catwalk. A lot like life. 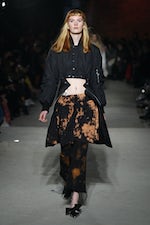 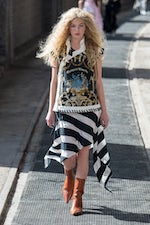 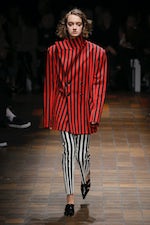 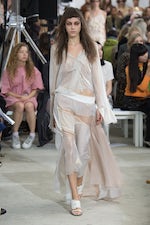