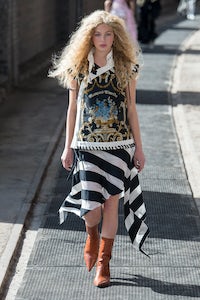 LONDON, United Kingdom — Part of what makes Marta Marques and Paulo Almeida so intuitive when it comes to designing clothes that women want to wear is that the designers have their own cabine of friends-cum-models who they invite to be a part of the design and styling process. The 30-plus “M’A girls,” as they’re known, are of all ages and sizes and a vital catalyst of the design duo’s output. It’s what gives it all such characterful poise.

This season, Marques and Almeida added to their canon of graphic stripes and feathery alternative to fur; this time pink marabou followed the seam of bias cut silk dresses and skirts. But what they brought afresh to their repertoire was an altogether sexier edge. Midriffs were revealed and kidney-shaped cut-outs showed unlikely parts of the body; thigh-skimming skirts sat beneath cartoonishly large blazers; shirts were shrugged off bare shoulders. The particularly exceptional trousers and cargo pants were cut to be low-slung with big, swaggering belts. It felt like a fresh take on the cargo style, which has been percolating in the air throughout the week, perhaps as a throwback to its glory days in the early 2000s.

Marta Marques said that she was thinking about motherhood, mainly because she herself became a mother five months ago. The country road they followed led to the hallmarks of Americana. Dolly Parton was a major influence, obviously, and she could be heard over the noise of the trains passing above the showspace on a graffiti-covered railway bridge. Parton was also there in the clothes: cow hide was either fused with Chinoiserie prints or used in saturated colour for box bags, and there was also scarlet sequin-spangled banners and flaming cowgirl boots.