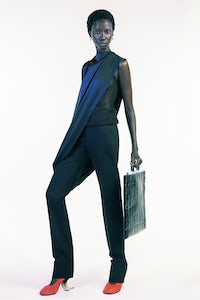 PARIS, France — Due to the current circumstances, my meeting with Matthew M. Williams happened via a digital connection, from Milan to Givenchy’s Avenue George V headquarters, where Williams was installed a few months ago as the new creative director of the storied couture house that Hubert built. It all felt very Gattaca: the hyperreal sheen of a hi-res cam, the immaculate, glaring whiteness of the space, and Williams himself in a flawless black suit and newly bleached bangs. The human connection was missing, but Williams is clearly on a mission to project Givenchy into the future with an awareness of its layered past which includes the legacy of the founder, as well as the durable imprints left by John Galliano, Alexander McQueen and Riccardo Tisci.

To describe his goal for Givenchy, Williams used that popular and often-abused term: inclusivity. By definition, luxury fashion excludes those who have lower spending power, so inclusivity in this context can sound a bit like an empty catchphrase, but, of course, Williams was talking about something else: a desire to create products that can speak to a wide cross-section of generations. That’s a wise move, and the collection was on point in this sense: from embroidered pieces to cutout bags to interlocking padlocks, there was a bit for everybody without it looking like selling out.

Hardware is a Williams signature, and hardware — said padlocks — is where he started at Givenchy. As for the clothing, both men’s and women’s, this was an interesting first step in the merging of Williams fierce urban sensibility with the savoir faire of a French couture house, though there were palpable debts to Demna Gvasalia and Helmut Lang. There was also a pervading impression of sharpness, but cut-outs and transparencies added hints of sensuality to the proceedings. Overall, it looked a bit rigid, a tad too geometric at times. Melting the icy vibe could be the way forward.