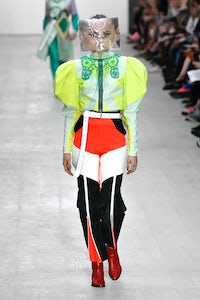 LONDON, United Kingdom —  Matty Bovan’s invitation advertised 60 150mg capsules of Makenibo. He said the name was a chemical confection, a loose anagram of his own name, but I checked and the word translates as some kind of happiness somewhere in the world. Happy pills! They seemed like the perfect prescription for a collection that its creator titled “Hope+Fear”. While I was surrendering to “Years and Years”, Russell Davies’s perversely exhilarating vision of soon-come dystopia, I was thinking that I wouldn’t be surprised to see fashion dancing to its disturbing tune this season. It felt to me like Bovan struck the first chords.

Olafur Eliasson’s thought-board in his exhibition at Tate Modern includes the following rumination: “Hope locates itself in the premise that we don’t know what will happen, and in the spaciousness of uncertainty, there is room to act.” Bovan acted, at the same time as he acknowledged that not knowing what is about to happen politically, economically, socially, culturally, any-which-wally in the UK weighed heavy on him as a young designer.

He blasted apart the milkmaid silhouette that’s become something of a signature with big geometric shapes that shoved upwards like tectonic plates. You want a visual metaphor for upheaval? You got it. Bovan draped these excrescences in Liberty prints, echoes of the 19th century Arts and Crafts movement. Leg’o’ mutton sleeves also evoked Victoriana. But that century mated with this: crochet and zippers, a puff-sleeved blouse and motocross pants, gilded silk and grey marl sweatshirting. And everywhere there was lacing, like the milkmaid’s corseting or the bike courier’s leggings. There’s hope in something so gleefully pell-mell, past piled on present to make a future, flouting despair.

So what about the fear? Some of the models sported face shields by Stephen Jones. They looked like something you’d wear in a riot. After the show (and in his accompanying notes), Bovan mentioned hospital uniforms and medical procedures. That made me think of the seemingly incurable breakdown that Brexit has induced in the UK’s body politic. It is surely a suitable case for treatment. The spaciousness of uncertainty will be sorely tested for the foreseeable future.