Sarah Burton stuck to her guns, delivering a wonderfully sharp and precise outing that was spot on. 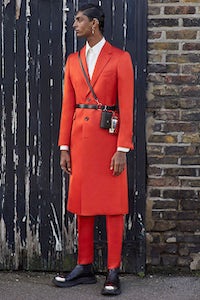 Sarah Burton stuck to her guns, delivering a wonderfully sharp and precise outing that was spot on.

MILAN, Italy — Sarah Burton is a consistent designer. She sticks to her guns, immune to fickle trends and passing fads. tailoring — of the sharp, frighteningly thin, obsessively precise, elegantly militaristic variety — has always been her main preoccupation at Alexander McQueen, even when the fashion winds were blowing in other directions. Now the wind is blowing towards her and Burton’s stress on the sartorial feels spot on.

Unlike newly converted formalists, Burton is not forcing tailoring in any new, ostensibly modern direction, mixing it with sportswear and similar stuff. She’s going, instead, for the archly formal - minus the neckties - adding an army/punky slant in the form of cap-toed derbies, harnesses and an assortment of earrings. That’s it. Modernity in the eye of the beholder.

This season’s main focus was a collaboration with the Henry Moore Foundation, which resulted in drawings from the artist’s estate reproduced as allover prints on suits. Thistles splashed onto narrow coats reasserted the naturalistic streak which is another Burton mainstay, together with artfully panelled suiting. It made for a wonderfully precise outing, even though the thinness of it all was quite striking. The only problem with being so consistent is that it risks feeling a bit formulaic. Even Burton needs the occasional rupture.