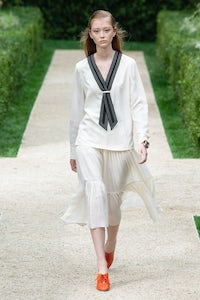 NEW YORK, United States —  Every summer, Tory Burch’s parents Reva and Buddy Robinson would leave their kids at home while they sailed around the Mediterranean for six weeks. Tory and her brothers didn’t miss them. Their grandmother was with them on the family farm, and there was plenty to keep them busy, including the 35 German shepherds that lived in the barn. “My parents’ philosophy was that children should be seen and not heard,” Burch said after her spring show on Friday morning. Those were different times. But she has only the fondest memories of those summers, especially the bit when Reva and Buddy returned home laden with the souvenirs of their travels.

Her parents’ style — sophisticated, patrician — has long been a pillar of Burch’s design aesthetic. Sure enough, her new collection featured tailored safari jackets, wrap dresses and trim little knit polos. They're her bread and butter. But this designer also has a real knack for adding an allusive, dreamy undercurrent to her all-Americana, and here she drew inspiration from Reva and Buddy's souvenirs of the people and places they encountered. There was Tangier in the free-flowing caftans, Sicily in the severity of a buttoned-up, lace-trimmed black cotton shirt dress, the Levant in the gold coin embellishment, and small villages all over the Med in the floorsweeping volumes of poplin peasant skirts. There was an airy prettiness here that defied anyone inclined to a search for serious substance in the Burch oeuvre. But Tory might have been hedging her bets when she gave a subliminal nod to the village priest with her long, black tank dress over a white shirt. The model dangled prayer beads. So did Burch, in a rare acknowledgement of stress.

She remembers her mother as an adventuress. Michel Gaubert added a sly little fillip to the soundtrack with Simon and Garfunkel’s “Mrs Robinson." Maybe not quite the adventure Tory had in mind.