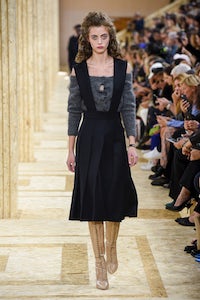 PARIS, France — Miuccia Prada opened Milan and closed Paris with shows that resounded in the current fashion climate, where brands are racing to formulate a position on how to convincingly marry social principle and corporate profit. The Prada show was distinguished by its serene rejection of excess. Miu Miu typically took a more wayward route. “I’m suggesting a way of dressing that would leave people free to do their own thing,” Miuccia said. “Raw was what I really cared for, simple, intuitive, not too much fuss.”

Raw as in a canvas skirt, a muslin slip, an old cardigan stretched across the shoulders to create some sweater-girl oomph. That improvised DIY quality was fundamental to the collection. Miuccia liked the idea of something quite severe and structured that had been mutated by the ingenuity of its wearer. It was striking in the hand-painted effects: big naïve flowers, tiny dotted ones, combined with drips and splatters. There were also big, raw floral appliques. Those stretched old knits appeared often. So did a tacked-on random ruffle or two, and shearling trims, like a home-made decorative element.

For the Prada collection, there were necklaces made of seashells. Here, there were brooches of tiny fired clay curlicues and the family pearls strung together with pieces of rope, and big, bejewelled buttons adding sparkle to oversized man-styled pieces in traditional houndstooth and Prince of Wales check. Again, you could imagine these details being dreamed up at home by a glamorous but cash-strapped family in hard times. They climaxed with a long silk gauze dress roughly sashed in lilac and yellow, like something rustled up by a castaway beauty queen on her desert island.

The last really hard times in Italy followed WWII. The hair, the makeup, the silhouettes harked back a little here. Now the shadows are growing long again in Italy, just as they are elsewhere, and there is melancholy in Miuccia this season. She insisted she wanted lightness in the clothes, but a snippet of Michael Nyman’s chamber music for “The Cook, the Thief, His Wife and Her Lover” set a different mood – darker, more attuned to current events. “Clothes are a way of looking at reality,” she acknowledged. “It’s not that fashion can solve the problems of the world, but it can contribute to a nicer life.”