PARIS, France — Great expectations loomed large over the men’s fashion week that ended Sunday in Paris. This was the season of LVMH, so to speak, with the debuts of Virgil Abloh at Louis Vuitton and Kim Jones at Dior (formerly Dior Homme, rest in peace skinny tailoring and teenage angst) resulting in just the kind of hype the French luxury conglomerate was likely aiming for.

Above all, it’s context that matters more than content these days. Clothes are relatively unimportant — if not irrelevant — to the wider brand communications narrative, which is now the essence of the industry. But let's not forget that fashion, despite having become a pillar of popular entertainment, is rooted in garment-making. And if we actually examine the clothes and not the Instagram-friendly showmanship, there was little to report and this piece could end here.

But let's not be too radical. In fashion, genuine progress is new shapes defining new attitudes while responding to new needs. Sampling and collaging ideas together to create seemingly new silhouettes that are actually iterations of staid tropes creates stagnation.

So, did the much-anticipated disruption actually materialise? No, it did not. It was much ado about little, with Kim Jones bringing a coating of pop desirability and couture softness (with some devilishly perfect millennial-friendly merchandise along the way) to the house of Dior and Virgil Abloh embracing tailoring of the slouchy variety instead of splattered logos at Louis Vuitton. Indeed, what actually stood out was the sense of continuity. 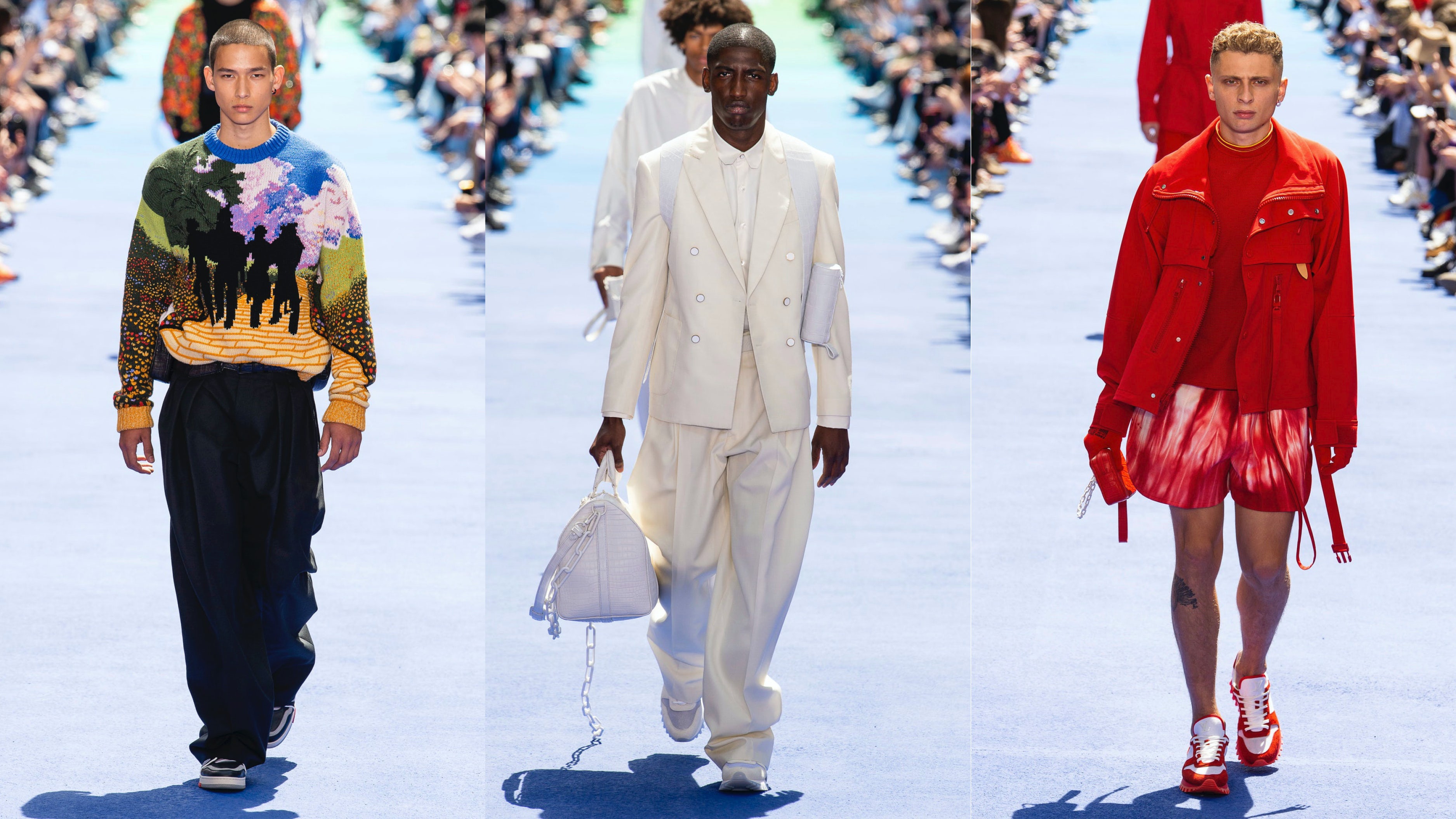 And yet Jones showed guts and knowledge, playing with fit and structure, and offering a glimpse of what the future could hold at Dior. Abloh, on the contrary, has work to do. It's not a matter of having design training or not — Giorgio Armani never went to design school. There was, of course, the new era of inclusivity that was apparent in the phenomenal casting and staging of the show. But unless Vuitton lowers its prices, it will ultimately still exclude most of the kids out there.

Much more challenging and interesting is what Glenn Martens is doing at Y/Project, mixing design experimentation with the coarse grittiness of the street. By pushing the limits of taste to the extreme in order to play with the downright ugly, Martens keeps inhabiting a strange niche at the crossroads of different genres. You either love it or hate it. Yet, he undoubtedly has the will to test new forms and propose new species of clothing. There are very few young designers working like this today. Matthew Williams of Alyx is a deft experimenter, yet he needs to build a look as forward as his designs.

Among the established names, a few lonesome titans keep marching to the beat of their own drum regardless of the passing fads and other shared preoccupations. Rick Owens is one of them: a creator who invariably delivers punchy shows filled with punchy fashions. The coloured smoke filling the plein air setting this season was particularly noteworthy, as were the reconfigured tool belts and the wearable tents. Dresses are habitats, that's for sure, but Owens brought them to the level of self-sufficient units, calling out the Tower of Babel and Tatlin's Tower along the way. If you want to isolate yourself from the horrors of the present world, look no further. Rei Kawakubo, au contraire, was in feisty mode and her playful suits went accordingly bonkers and delightfully so.

But as in Milan, the biggest battleground in Paris was youth. On one side, there are those who keep identifying a youthful spirit with streetwear; while on the other, there are those who are pushing youth to new sartorial grounds, creating a debate that's finally pushing fashion away from the streetwear craze that has produced a lot of lazy design lately. 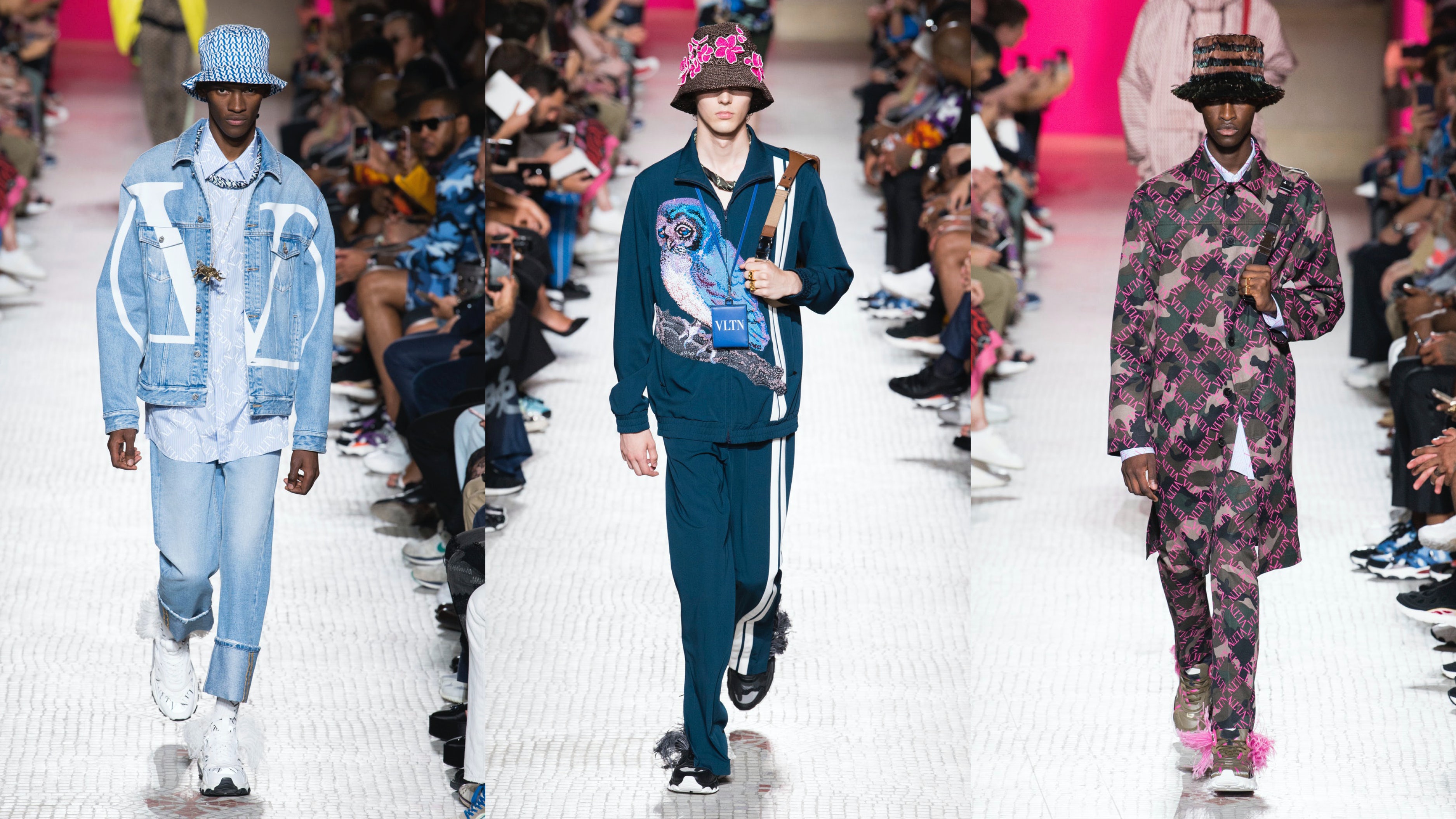 Pierpaolo Piccioli of Valentino deserves kudos for constantly trying to expand the Valentino codes by looking at what's happening in the world. He has been interested in the street — or a fantasy of it — for quite some time now. This season the movement reached a peak, bringing him right on the sidewalks of the metropolitan ghettos where trappers live in their tracksuits and bucket hats, quite a stretch from the Roman grandeur of Piazza Mignanelli, the home of Valentino.

Did the clash of couture and street music, of extravagance and suburban flash, of feathers and logo work? It did: Piccioli knows how to master chaos and keep his expression elegant even when delivering a suit printed with the loudest of Valentino logos. Yet, it all seemed like too much of a concession to the taste du moment and one that deeply questioned the identity of the Valentino man in the whole Valentino system. The Valentino trapper, in fact, hardly speaks to the Valentino woman, not to mention Valentino’s couture heritage. Piccioli's aim seems to turn Valentino into a kaleidoscope, exploring his own many creative personalities with the different voices of the brand. One way or another, he identified youth and street, which is starting to look like the past.

Raf Simons, now into his 50s but still enamoured with long lost youth, is of a different inclination, leading the bunch of creators who are trying to give formality a second chance. Although missing the edge of past efforts and actually fairly repetitive in terms of shapes, Simons’ latest collection for his namesake label proved that a suit or a faultless coat, even one worn on reverse with torn-apart lining, can stand for youth just as much as a sweatshirt. OAMC, the brainchild of Luke Meier, was a perfect marriage of precision and pragmatism: urban-wear raised to sartorial grounds. 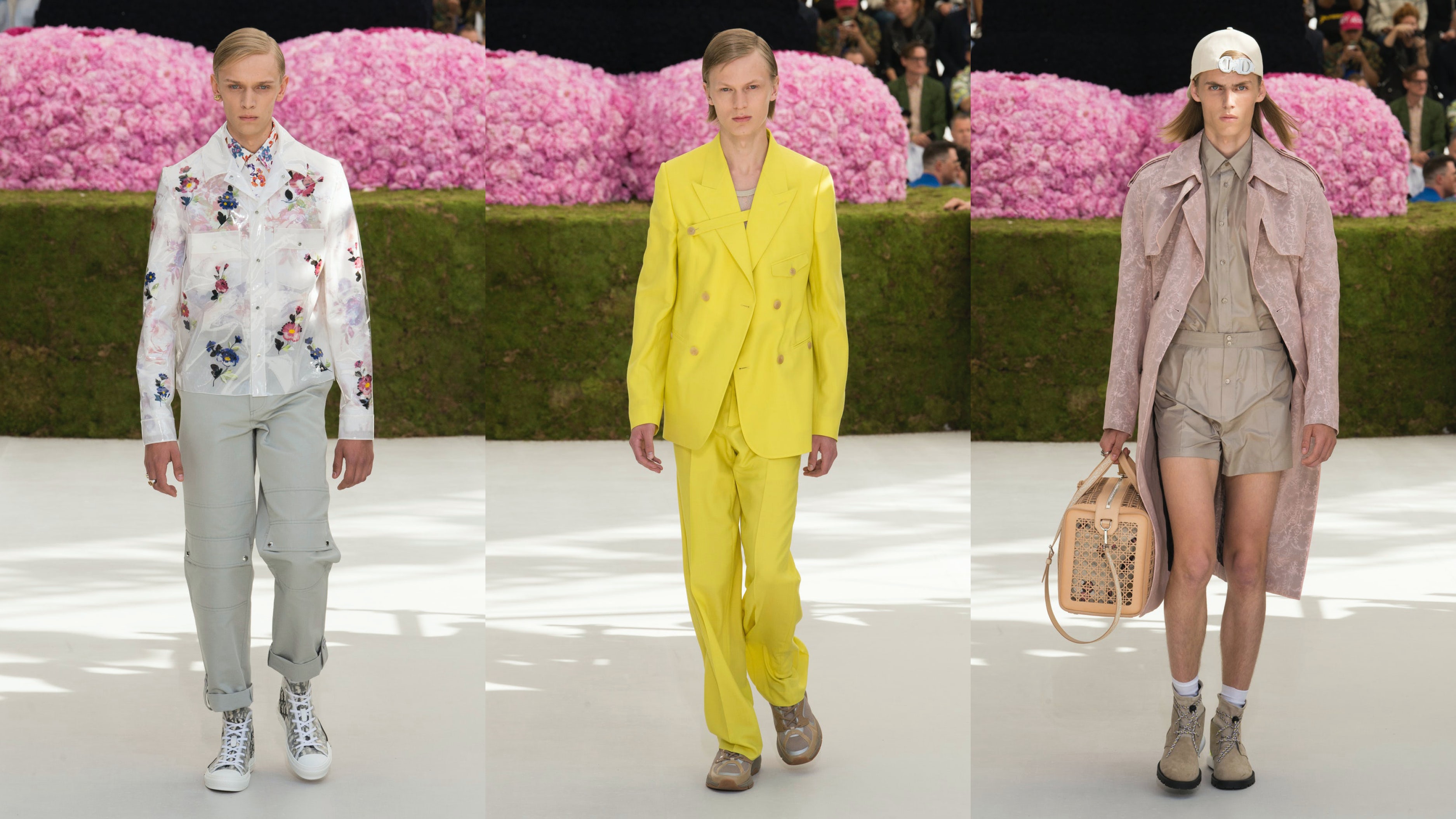 In a stellar collection for Alexander McQueen, Sarah Burton did away with trainers and other obvious signifiers of youth to focus on the twisted precision of tailoring, which she filled with the freewheeling sense of elegance of artists like Francis Bacon and John Deakin. It was a lot, with a sense of masculine restraint and abandon that felt invigorating, not least because it had glamour.

Glamour, what an old school word. And what a progressive concept. Leave it to the master John Galliano at Maison Maegiela to wrap up the season with a feat of technical prowess that was as sartorially challenging as it was progressive in terms of its representation of masculinity. In his first Artisanal collection for men — and having recently observed how freely the new generations approach black tie dressing — Galliano transported his own signature bias cut to menswear, concocting new visions of sensuality and fluid sexuality. The mix of vinyl and couture finesse, corsets and bikers, was smashing. But what really stood out were the bias pieces such as the capes capturing the hastened gesture of throwing a coat over one’s shoulders.

Here you are then: a new need for elegance translated into a garment that creates a new gesture. This is the kind of fashion worth writing about. The rest is just noise.