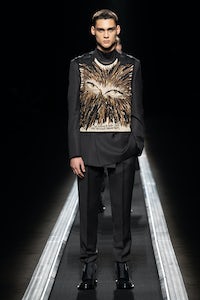 PARIS, France — If Christian Dior and Kim Jones were ever to be sitting next to each other on a plane in some alternate time and space, I wonder what they’d talk about. Art might be a good icebreaker, Dior the erstwhile avant-garde gallerist, Jones the obsessional collector. Would Dior try to sell Jones a picture?

Art has been one of the threads that has drawn Jones into Dior. It has been the key to each of his shows and the artists with whom he has chosen to collaborate have already each, in their unlikeliness, left a radical imprint on the house.

Friday’s collaborator was Raymond Pettibon, launching his career with graphics for Southern California’s punk scene in the early 80s, graduating to a retrospective at the New Museum in New York in 2017. The show closed with a shirt jacket embroidered with a Pettibon piece titled “The Remaking of Renaissance Man.” It took 15 people 1,600 hours to make.

Those stats are reminiscent of the numbers couture houses throw at you when they’re talking about gala gowns. Dior is the most famous couture house in Paris. Jones turned that reputation to his own purposes. The most striking expression in his collection was the technique of moulage, draping directly on the body to create swathes of fabric that sensually wrapped tailored jackets and spilled off casually to one side in a sash effect. (Jones’s friend Jun Takahashi went for something similar in his Undercover collection the other day.)

There was more in that vein. The legend has always been that a couture jacket was so beautifully made it could be reversed and worn inside out. Jones showed blousons that did precisely that. He also underscored Monsieur Dior’s legacy with his use of animal prints and a rich, muted colour palette.

The delicacy of Jones’s Dior debut was replaced here by a tougher, military edge, with trousers tucked into gaiters, arms sheathed in leather gauntlets, torsos protected front and back by padding. Pettibon’s art is fiercely political, so Jones’s decision to work with him felt particularly timely, with civil unrest an overwhelming media subject of late. The sensational opening look featured a beaded tabard of fierce, feathery eyes with the rubric, “With their own light and lash I have drawn them.” The message drew Jones, whose animal activism was shaped by his childhood in Africa.

One of the signatures of his career has been his ability to mesh past and future, the solidity of human craft and the speed and sheen of technology. Jones staged his show on a 72m conveyor belt, the models moving from Point A to Point B in perfect statue-like stasis. It was an update of his previous presentations in Paris and Tokyo, both taking place around maypoles of sculpture by KAWS and Hajime Sorayama, respectively. The motionless effect was cyber-eerie, especially given the get-up-and-dance pulse of Honey Dijon’s soundtrack. But it emphasized the fact that Kim Jones is making a new man at Dior. And he’s still exploring prototypes.