MILAN, Italy — Do we really need fashion weeks, at least in the way they are currently conceived and broadcasted? The question kept hammering through my head at Milan Fashion Week. The event was certainly no smash hit, nor did it offer a smorgasbord of new ideas. But all the hammering hasn’t resulted in a definitive answer.

I have lived in the fashion world long enough to have witnessed a lot and perhaps I have become blasé. I am fighting against it, but it’s becoming harder and harder. After all, fashion, like Kronos, the Greek deity of time, keeps endlessly destroying and remaking the same things — always differently, yet always the same, ad infinitum. So it’s quite natural, at some point, to have the impression of having seen it all — even more so in this era of endless sampling, homogenisation and clustering around certain trends. 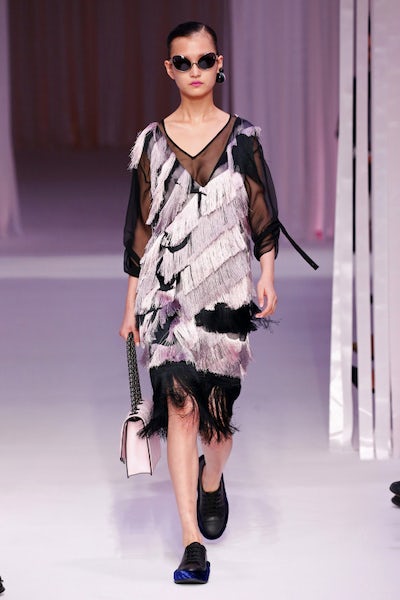 The problem about fashion weeks, however, is deeper and much more complex. This is what Milan made glaringly clear with its feast of extreme looks, which seemed little more than styling exercises and a flood of frankly boring and repetitive signifiers known “codes.” The Prada and Gucci shows were both cases in point, albeit visually smashing and enchanting in terms of narrative.

Are fashion weeks targeting professionals or are they now some sort of global entertainment? Are they about ideas or about products? About something to wear or merely something to see? Do they speak to the world at large or just to fashion people? Catwalks have never been about reality — not even now that hyper-realism à la Vetements is the ubiquitous style currency du jour — and luckily they have also never been about common taste: the purpose is to challenge common taste and this is what makes them fantastic, inspirational and aspirational. Yet, never like today has the gap between catwalk fashion and reality been so wide, which makes fashion shows, as a gathering of professionals, a tad pointless.

You see, the fashionistas and the attention-seeking wannabes orbit show venues wearing full looks, while the rest of the world simply picks up the crumbs. Indeed, most of the shows we see today result in flashy media and little else. Designers like Helmut Lang and Martin Margiela, but even arch-provocateur Rei Kawakubo or uber-dreamer John Galliano, are influential exactly because, even at the peak of their experimentalism and love for storytelling, they never forgot about dressing a real body moving through a real environment. Can this be said of the fashions we see today? Hardly so.

Peter Dundas’ decadently wrought-out, nth foray into the realm of bohemian glamour looked rather costumey, if catchy, while Massimo Giorgetti's wonderfully bonkers exploration of the subcultural power of the frill was smashing, if at times it projected an abstract view of the human body. The disco-baroque festival put on by Dean and Dan Caten of DSquared2 looked utterly carnivalesque and theatrical. Still, it seemed easy to translate into a more commercial offering.

In Milan, the real trend, if it is a trend, was endless repetition.

Then there was Milan's most polarising show, Jil Sander, which sharply divided critics with a very strong look. The show said a lot about the way fashion works today, on many levels. In an attempt to make a bold move, creative director Rodolfo Paglialunga went for a broad-shouldered silhouette that was an amplification of what he began last season. Fact is, in the meantime, broad shoulders have become a Vetements/Balenciaga trope and thereafter Paglialunga fell involuntarily into the copycat category, the impression enforced by a series of ill-fated pleated dresses a tad too close to Issey Miyake's Pleats Please. Pleats aside, it is clear that Demna Gvasalia does not own broad shoulders — they were launched in similar fashion on the 1940s, only to be reprised in the 1980s — but it is also clear that whoever arrives first wins, and Demna did just that. It is a pity, because Paglialunga's dresses — beyond the mannish shoulders and the unmissable reference — had a beautiful flow.

The case of Jil Sander brings up another topic: in an industry that does not take kindly to criticism of any kind, using the power of big-brand advertising budgets to silence unwanted opinions, can there be any progress? Rodolfo Paglialunga got his fair share of harsh critiques, but Giorgio Armani and Dolce & Gabbana never do. Prada does, even though the intellectual reverence Miuccia Prada has crafted around herself shields away pointy criticism. 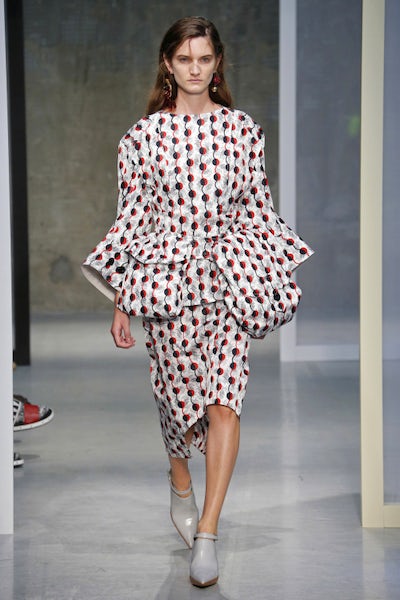 This situation, in Milan in particular, creates a sort of stagnation, making the city look like a place that is still averse to new voices. Yet actually there is a lot bubbling underneath the surface of Armani's never-changing simplicity, Prada's infinite quest for wrong elegance and Dolce & Gabbana's clichéd depiction of Italian glamour. But does anyone notice? Does the Camera della Moda help in any way? It was a pity that Lucio Vanotti, whose brand of streamlined purism is soulfully sophisticated, got a spot on the very last day of the calendar, when most of the editors had already left.

Edward Buchanan is another talent — his Sansovino 6 line a thing of pragmatic beauty — who remains under the radar and at the fringes of the official calendar. Arthur Arbesser, who keeps firmly progressing but still needs a stronger focus on the product, shows on schedule, but crammed in between big houses showing at opposite ends of town.

Yet these shows might actually be the only places in Milan where one can find labels that are new and mildly exciting with truly individual voices. Elsewhere, it is consistency that wins. In Milan, the real trend, if it is a trend, was endless repetition. Save for designers like Marco de Vincenzo, who put way too many ideas on the catwalk, it was all about hammering viewers with one single look, explored this way and that, reiterating the same point from beginning to end. This happened to various degrees: at Pucci, it was a rather weak take on neons, while the dazzling diversity of the looks and the characters at Gucci looked extremely repetitive, too, despite being kaleidoscopic and intoxicating.

At Marni, on the contrary, repetition was explored as a wonderful way to augment and expand creativity, spawning a sublime journey across sculptural forms and monochromatic looks. In Marni's case, repetition was a stimulus, but for the rest of the bunch it was just a marketing tool.

Which brings us to a conundrum contemporary fashion needs to solve, quickly: should fashion be about endless change or utter permanence? About constant reinvention or stability? A mix of the two would be wise, probably, but being wise is actually the opposite of creativity. The designer who has found the right balance is probably yet to be born — at least in Milan.