Sex and the body were the main topics on the Milan runways this season, reports Angelo Flaccavento.

Sex and the body were the main topics on the Milan runways this season, reports Angelo Flaccavento.

Milan, Italy — The Milan fashion week that closed on Sunday was a polarised affair: a mix of intimate gatherings at which the clothes were almost at hand’s reach — see Armani, for instance — and grandiose mega-productions traveling through space and time.

Of the large-scale spectaculars, Prada was certainly the most captivating. Life-sized screens dispersed into the labyrinthine set functioned like digital doors connecting Milan and Shanghai, where simultaneous shows were being held. Guests in Milan could see what happened on the catwalk in Shanghai, and vice versa, and it all felt like a mind-expanding displacement peppered with an Escher-esque sense of vertigo.

As for the collection, seduction was the theme. Sex and the body were the main topic of discussion this season in Milan, because sex sells and post-Covid there is a desire to get physical again. Voluptuous womanliness has always been part of the Prada lexicon. But with Raf Simons as co-designer things took a turn: tropes of femininity like lace, trains and bra cups were stripped down to striking effect, reimagined for the post-MeToo generation. It was a bold outing, but it lacked Mrs Prada’s depth.

Simons has clearly been brought in to speak to a younger generation –and here his mega-sized take on the Prada logo has been a hit. But he has somehow brought a flatness to the proceedings, along with some obvious references. The deconstructed trains and pointy shoes were too clearly reminiscent of Helmut Lang circa 1997, which is something that never happened with Miuccia at the helm. Of course, it’s not where you take things from, but where you take them to. At Prada, it would be great to see co-creative direction that takes things to new places again.

There was a kind of alpha-male grandiosity — as charming as it was discumbulating — to Mondogenius, the global, multi-disciplinary and eminently product-less broadcast that marked the newest installment of Moncler Genius. Remo Ruffini, the Moncler president and CEO, is a visionary who likes bold moves. Genius, a constant stream of creative collaborations, set a new template for fashion marketing in the Instagram era. But if Genius was anything but madness, there was not much method to Mondogenius, which lacked depth and coherence. Each one of the current roster of eleven Genius designers proposed a different activation in a different city, ranging from a contemporary art exhibition to a skydiving performance to a concert. The whole thing was broadcasted live and hosted by Alicia Keys. A spectacle to be sure, but it was not easy to find a common thread, apart from the cliché of community building. 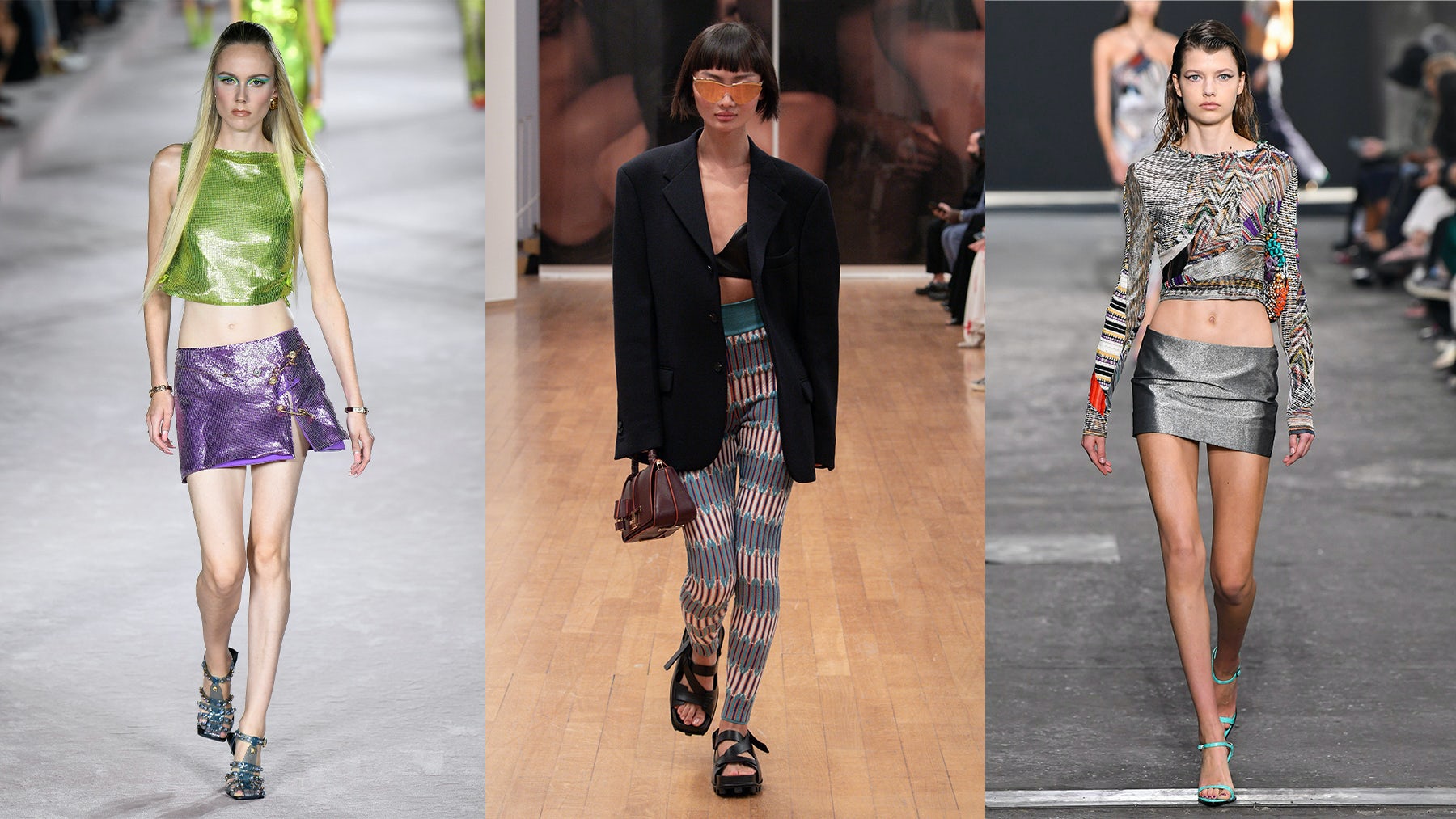 Donatella Versace peppered her show with old school entertainment: the kind that attracts screaming IRL crowds at the door. She had Dua Lipa opening and closing her show, plus Lola Leon and Naomi Campbell in the middle. It was a blast. As for the collection, it was another recap of Versace tropes: safety pins, pop colours, unabashed body-consciousness and so on. In other words: nothing new, but still powerful at a moment in which fashion is discovering sexiness once again.

Milan was all about the body, which means bare legs and glimpses of skin were all the rage. The goings took a particularly fresh turn at ATXV, the new label created by Antonio Tarantini, with a feast of asymmetries, draping and juxtapositions of skintight and slouchy that looked edgy and new on both women and men. At Philosophy, Lorenzo Serafini replaced romantic with bold, and it felt timely, while at MSGM sensuality was interpreted as fluoro brights and sporty shapes.

Everything was short and sharp at Tod’s, where Walter Chiapponi delivered a clash of Sixties bon ton — part “La Dolce Vita,” part “Valley of the Dolls” — and sports that was all about short hemlines, fresh svelteness and pops of color, with spot on accessories polishing it off. Despite Chiapponi’s obvious talent, the show did not hang together particularly well, probably because too much focus was put on the accessories, which sometimes happens at Tod’s due to pressures from the senior management. A creative director with a vision like Chiapponi should be given more freedom to roam.

There was a lot of sexiness and a raw, stripped down sensuality at Missoni, where lieutenant Alberto Caliri took the reins from Angela Missoni, who exited the creative director role in May. Caliri’s vision was fresh and speedy, but lacked the joyful elan that makes Missoni special. CEO Livio Proli is clearly pushing for a more youthful offering, but forgetting about Missoni’s rich heritage would be criminal.

The interplay between CEOs and creative directors is an interesting topic, as it’s what creates the whole atmosphere of a brand. With ex-Burberry chief Marco Gobbetti starting his tenure at Salvatore Ferragamo in January, and a creative director not yet nominated after a shake-up at the brand, Guillaume Meilland filled the void with considered sensitivity, delivering a quiet collection that was as refined as it was delicately sensual. Will he be the next one raised from the ranks to the driver’s seat? It could be an interesting challenge. First, it’s critical to define what Ferragamo really stands for. Craft or sensuality? Opulence or eccentricity? Make takes are possible.

But perhaps what was most exciting at Milan fashion week was the sense that a new generation is finally taking over, with visions that are bold, personal and varied, ranging from the tough, political romanticism of Act N.1 — all tulle ruffles and exacting tailoring and metal rings and corsetry, much in the Sarah Burton way, yet a bit more blunt, abrasive even — to the post hippie, sustainable knitwear of Vitelli, a collective based in the casbah-like center of Milano and lef by Mauro Simionato, whose fashion is strikingly chaotic and shapeless, and oh so captivating for that.

Loris Messina and Simone Rizzo have grown Sunnei into a force all its own, based in Milan but eminently placeless, digital in the best sense of the term. They master the art of sardonic, simpatico/antipatico communication like no other, and know how to throw a grand gesture. Held in a glaringly white space under strobe light, aided by Vittoria Cerciello’s energetic styling, the show was the duo’s best so far: an affirmation of the abstract and playful modularity Sunnei stands for. What is exciting about this brand is the width of its reach and the fact that, despite being decidedly jolly and young, the formula is also ageless. Sportmax is certainly not a young brand, and it is designed by an anonymous team. And yet, in its hyper-styled jumble of faded colors, ribbons, romanticism and the like it felt particularly fresh this season. 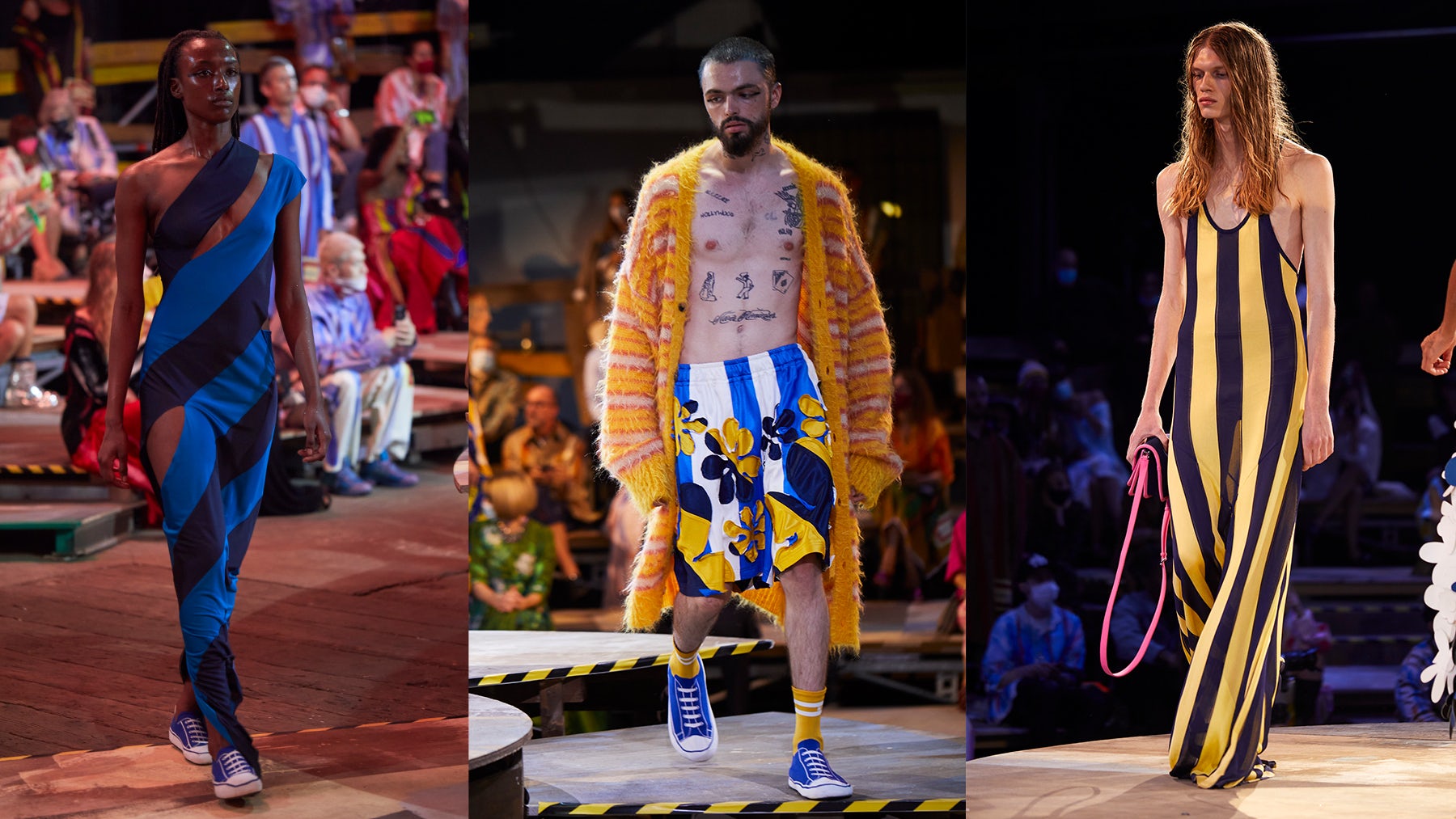 But it was Francesco Risso who, at Marni, delivered the show that best captured the needs and the urges of the moment — emotion, connection, sensuality — and blended them together into one chaotic, captivating, extremely emotional whole. Involving the audience in the show itself, Risso dressed guests in striped, upcycled uniforms and presented a collection that was all about the stripes, falling here and there, straight and diagonal, occasionally mixed with daisies. Historically, stripes have been used to brand convicts, jesters and lunatics, as explained by Michel Pastoreau in the seminal essay “Devil’s Cloth.” Risso used the power of stripes as an ode to diversity. There was an art school feeling to the proceedings, but as part of a gesamtkunstwerk the clothes acted like emotional vessels, and music by Dev Hynes made it all explode. Being there felt like a genuine fashion moment, something that Milano has long been missing. As for the commercial potential of all of this, it was the wrong question at the wrong time. 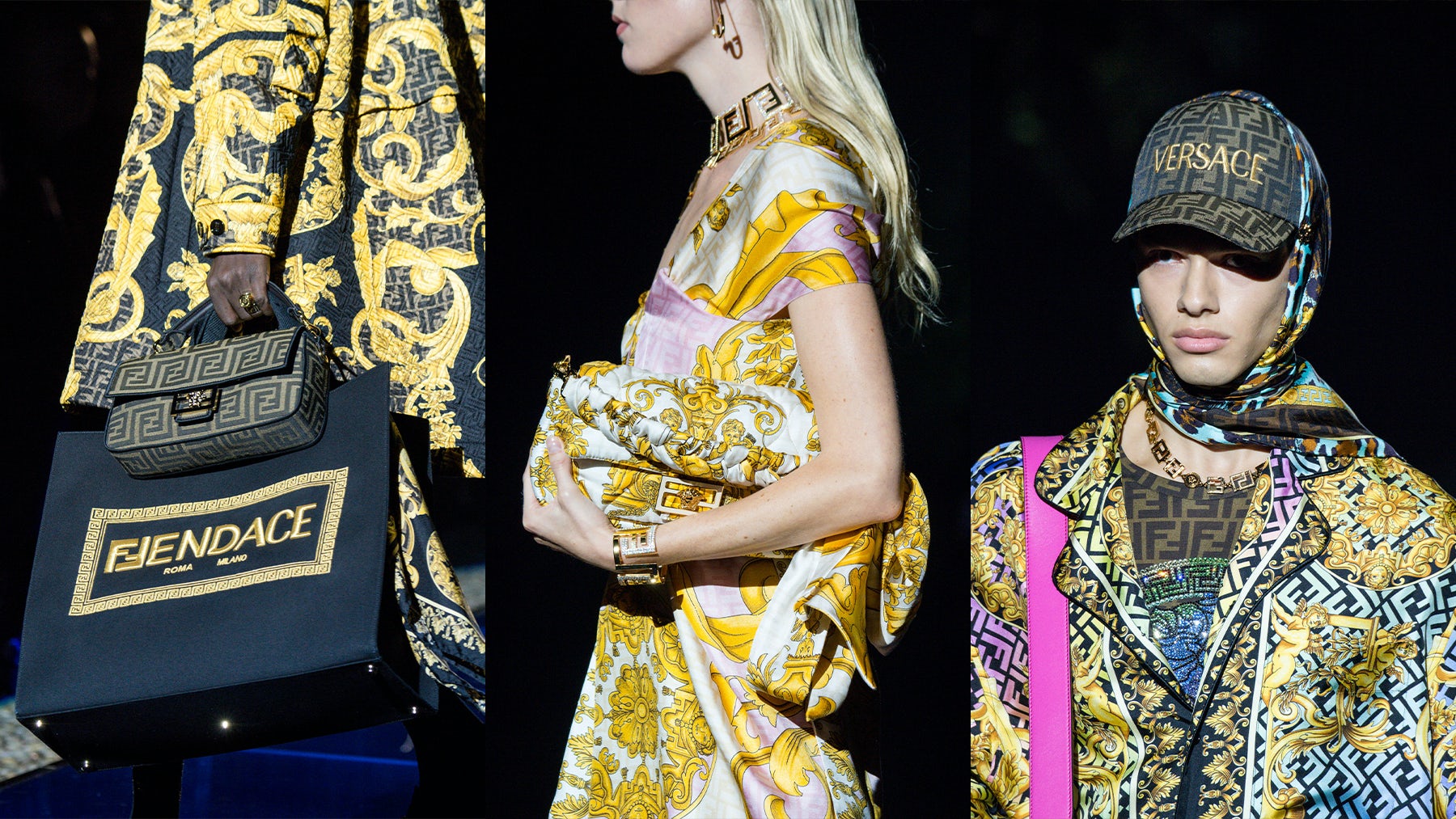 But commerce made a surprising comeback at the tail end of fashion week with FENDACE, a secret show for the collaboration between the house of Fendi with the house of Versace. Balenciaga and Gucci did the big brand cross-pollination first, but this attempt was different: a collection split in two, with Kim Jones giving his take on Versace (safety pins, Barocco prints) on one side and Donatella Versace interpreting Fendi (FF galore and so on) on the other. The result was easy: a remix of brand tropes that will surely be a commercial hit, but certainly won’t move the fashion conversation forward that much.