The designer progressed her babydoll styles towards something altogether more grown-up, but the tipsy playfulness of her models still offered an antidote to the weight of adult life. 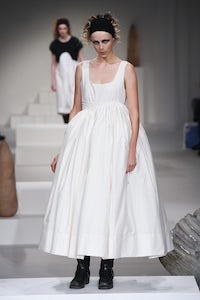 The designer progressed her babydoll styles towards something altogether more grown-up, but the tipsy playfulness of her models still offered an antidote to the weight of adult life.

LONDON, United Kingdom — Molly Goddard has made a name for herself on the back of her smocked tulle dresses, but today the London-born designer showed a collection that progressed her babydoll styles towards something altogether more grown-up. Instead of an ornately propped set, it was all clean white carpets (no red wine or Coca-Cola, like last time) tastefully scattered with the kind of clay pots your parents might own.

Perhaps the reason for that sense of maturity was that, after exploring children’s clothing for so long and playing with its proportions and playful colour, Goddard was ready for something a bit more sophisticated. This was clear in her neatly tailored blazers, occasional use of pinstripe and an abundance of slinkier, sexier dresses that were abbreviated way above the knee and worn with bare legs. Simplicity was key.

“I’m a bit sick of tulle,” she joked. “I still love it, but it just didn’t feel like the right thing this time.” Although the designer’s lodestone was largely absent (with the exception of a couple of cornflower blue and black variations), the void was filled with plenty of new fabrics: organza ruched into winged blouses and dresses, crispier cotton aprons and luxe taffeta tailoring.

If it all sounds very serious, that’s not to say it wasn’t also fun. Edie Campbell, arguably the most fun-loving supermodel of the moment, opened the show with a glass of wine in one hand and an e-cigarette in the other. Her cotton empire-waist dress even had a jaunty seam. She was followed by a diverse parade of models, each of whom paused on podiums to throw some serious shapes, stomping in leather riding boots or simply barefoot. The emphasis was on the sensual, not the sexual, because although Goddard may have steered more towards adulthood, it was still PG.

"Rather than serious coke-y 1990s fashion, this is a bit more giggly stoner fashion,” said Goddard with a smile.

The tipsy playfulness of her models and their characterful clothes was infectious, and the gesture captured the spirited naïveté of British women, just like Molly, whose young-heartedness still offers an antidote to the weight of adult life.