On the heels of their appointment as co-creative directors at Oscar de la Renta, Monse’s Laura Kim and Fernando Garcia delivered their strongest collection to date. 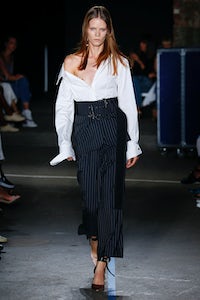 On the heels of their appointment as co-creative directors at Oscar de la Renta, Monse’s Laura Kim and Fernando Garcia delivered their strongest collection to date.

NEW YORK, United States — Monse’s Laura Kim and Fernando Garcia turned a corner with their Resort 2017 collection. “We had a good reaction from buyers, editors and stylists, and at that point we knew what we wanted to do with the house,” Garcia said a preview at the duo’s new studio. They call it “elevated casual clothes,” and it’s not a bad descriptor.

The label gained fast-and-furious recognition for red carpet looks when it launched a year ago, and they delivered some worthy contenders, including a rust-colored number beautifully crowded with sequins that sort of dripped off the sheer tulle covering the collarbone. But it’s the high-gloss daywear —  including folded-waist cargo skirts and cropped pants in heavy-duty cotton, menswear-stripe shirting, and sequins-for-day sailor tops — that will define this brand. There’s a lot of power in Monse’s clothes; perhaps it’s the push-pull between Garcia and Kim that creates such a frenetic tension. When they’re not careful, though, it can read brash instead of bold.

This season, however, they were — for the most part — in control, and ready to fully embrace the youthful sensibility of the Monse client. “Our girl lives on the internet,” Kim said. Quite in contrast to the woman they’ll be designing for at their alma mater, Oscar de la Renta, where they’ll be taking over as co-creative directors starting with the Autumn 2017 collection. The crowd at tonight’s show, nearly as thick as the early September air, indicated that the wait for their debut at ODLR— whose client lives in quite a different world than Monse’s — will not be a patient one.