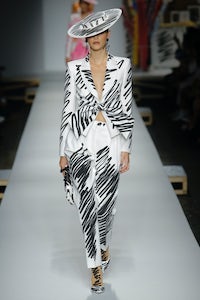 MILAN, Italy — Jeremy Scott's method at Moschino is rather formulaic. He chooses a theme — the more absurd, or pop, the better — and explores it this way and that, hammering the audience almost ad nauseam. It makes for some serious entertainment, and for some serious repetition as well.

This time round, the starting point of the collection was interesting. Scott started ruminating on the senseless speed of the fashion cycle, with designers being forced to deliver new stuff almost on a daily basis, and took off from that.

Basically, his idea was to present clothes he was not able to fully finish due to a short deadline: evening dresses still attached to the roll of fabric, ensembles filled with marker strokes like hastily completed drawings on a piece of paper; scribbled stockings.

It went on and on, but it was fun — nothing to do with cerebral deconstruction. The 1980s silhouette redolent of Ungaro and Saint Laurent added another layer of absurdity. Ultimately, however, at Moschino the joke is wearing thin. The scope and width of Franco's irony has been reduced to a silly gimmick. Jokes are fun, but there is more to Moschino than jokes: deranged classicism, for instance; a twisted bourgeois spirit; spirited couture. Maybe it is time to move on.