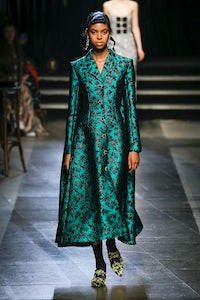 LONDON, United Kingdom — For the first time in his career, Erdem Moralioglu let music be the muse for a collection. And oh! what music! The romantic, melancholic mood of "The Queen’s Suite" made it sound like it could have been written specially for the designer. In actual fact, it was composed by the bandleader Duke Ellington for Elizabeth II after the pair met at a performance in Leeds in 1958. “I’m going to write something for you,” he told the young Queen, so impressed was he by her love of jazz. “I’ll be listening,” came her pert reply. Two recordings were made of the suite, one for him, one for her, both subsequently lost to the world until his disc was located in the Smithsonian.

Such a story of two worlds intimately connecting across a social and cultural divide was catnip for Erdem. While he was designing his collection, he took the story a step further, dreaming of Elizabeth dancing to the Duke at the Cotton Club in Harlem, Dorothy Dandridge or Billie Holiday on the mike. It was a gorgeous conceit. The set for his show was an afterhours mirage of just such a place, the clothes a rich hybridisation of Norman Hartnell’s puffball couture and the sensuous, satiny dresses of the Cotton Club’s chanteuses.

At times, it bordered on the surreal, as with the cardigan decorously buttoned around the throat but skewed furiously sideways over a bra and bared midriff, with a princess-y dance skirt in a washed floral print floating genteelly below. At other times, it made perfect sense, like a swirl of lilac chiffon, its embroidery delicate, almost Japanese. The key was always movement, the young Queen dancing while the big band played, tulle petticoats flaring the hems of her dress as she twirled. There were pieces that mixed vermilion fringing and silver tinsel, a flapper’s delight.

“Neon pastels” was Erdem’s own description of the colour palette. If there was something vaguely hallucinatory about the intensity of emerald green brocades or shimmering pink moirés, he also offered a reality check in the form of Prince of Wales plaids: a smart tailored jacket, a pantsuit, a midcalf coatdress. The relative sanity of such items was a reminder that Erdem’s mass-market collection for H&M launches in November. But even here, hems were frayed, coats and jackets randomly studded with encrustations of embroidery. It’s easy to see why Erdem is so fascinated with the Queen’s wardrobe. Her dressing is codified. So is his. But her codes exalt propriety, his subtly unhinge it. That has always been his gleeful challenge, and he rose to it yet again on Monday. Next time, how about a look at Princess Margaret? The fun never stops with that one.