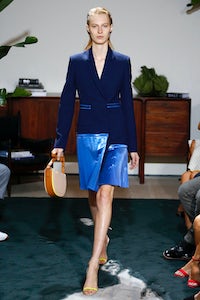 It’s his tenth anniversary in business in February, which occasions consideration of how far he’s come since he was a pet designer of Park Avenue princesses. Then, he looked young, but made clothes that skewed pretty but old. Now, he looks younger, and his collections have a questing edge that… well, that can take Ugo Rondinone as a starting point.

Nature and artifice connected in the first look, a traditional navy wool blazer stitched to a skirt in metallic taffeta. It was the most successful use of that fabric in the collection. Its stiff, papery effect was a bit much in a whole look. Nature and artifice came together again in nude organza pieces woven with metallic thread that scrunched to fit the body. They were jarringly piped in fluoro-yellow, adding an incongruous athletic element, a reminder, claimed Wu, of his background in American sportswear.

But it wasn’t America that echoed in the collection. The off-the-shoulder, on-the-bias asymmetry fit somewhere in a closet of vintage Kawakubo or Galliano. And clotted neon florals are an early Erdem signature. Which isn’t to say that the tulle dresses that featured them weren’t the loveliest and most surprising things in Wu’s show. “I try to be lovely sometimes,” he said with mock indignation. He did those dresses himself, placing each appliqued bloom very particularly. They rewarded close scrutiny.  That was why the designer scaled down his presentation, halving the audience so everyone could get a good look at his craftsmanship.

“I wanted the clothes, not the show, to do the talking,” he said. And one thing the clothes were saying is that there will be no See Now Buy Now in Wu’s future. Confident that anticipation feeds desire, he insists his women are happy to wait.