Barrett nailed his first twenty years in business and is feeling the need to expand in different directions. Once the totem of restraint, he is now the guru of the mobile disco. 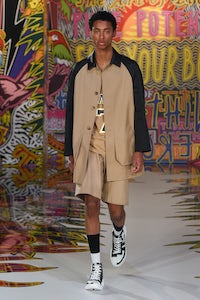 Barrett nailed his first twenty years in business and is feeling the need to expand in different directions. Once the totem of restraint, he is now the guru of the mobile disco.

MILAN, Italy — Neil Barrett has clicked with the NBA in the US. Included in his front row was a solid wall of basketball majesty. There’s a certain kind of peer pressure in that elevated stratum of sportsmanship. A player sees his teammate in something sharp and he wants it for himself. Maybe that’s why there was a new sense of scale in Barrett’s latest collection. He has always been the most restrained and rigorous of designers, but now he is dressing giants. Literal giants. Everything gets bigger.

But, in his case, that’s a good thing. Barrett has nailed his first twenty years in business and now he is feeling the need to expand in different directions, to edge his way physically and conceptually onto new turf. That’s what his latest collection was about. A couple of years ago, Barrett was taken by a South African artist named Jody Paulsen at the Museum of Contemporary Art in Capetown. His show on Saturday bore the fruit of that fascination. Paulsen usually works in felt, but as artist in residence for Barrett, his work looked like a more extravagant version of Keith Haring, covering the walls and floor of the show venue, shaping the pop graphics of the collection.

FIND YOUR BEACH, blared one of Paulsen’s backdrop messages. Barrett went looking. There was an easy, summery volume in baggy shorts and shirts. Trainers married skateboard and basketball, a signature Barrett hybrid. He reminded us that he has designed forty collections of hybrids. Why they still work was obvious in the trench with the baseball jacket sleeves or the denim jacket with tracksuit sleeves. But we expect that from Barrett. What was less predictable was how global the beach quest had made him. Maybe they came from Paulsen, but the densely patterned jacquards were a real surprise. And there was a wayward wit in the college sweatshirts. SLAYDE? The institution where academia meets drag? Now, that’s a hybrid.

But Barrett saved the most extravagant mash-up for last. In tandem with Wizpack, he launched “the world’s first wearable luxury sound system.” Backpack and boombox combined, with clarity and volume sufficient to drive your travelling companions to the outer limits of tolerance. Neil Barrett, the designer who was once the totem of restraint, is now the guru of the mobile disco.