NEW YORK, United States — It’s tough to be a small-scale American designer label right now. Whether you survived the Great Recession, like Jason Wu and Prabal Gurung, or launched in the years of disruption that followed, like Rosie Assoulin and Mansur Gavriel, faltering department stores, the rise of e-commerce and increased competition from Europe’s luxury conglomerates and direct-to-consumer upstarts alike have made for a challenging market. But smaller labels are finding ways to move forward.

Jason Wu returned to a traditional runway format on Sunday after a two-season break, fresh with funding from the Chinese private equity firm Green Harbor, which acquired his label in May. The new ownership structure enabled a creative “rebirth,” said Wu, who is feeling lighter now. 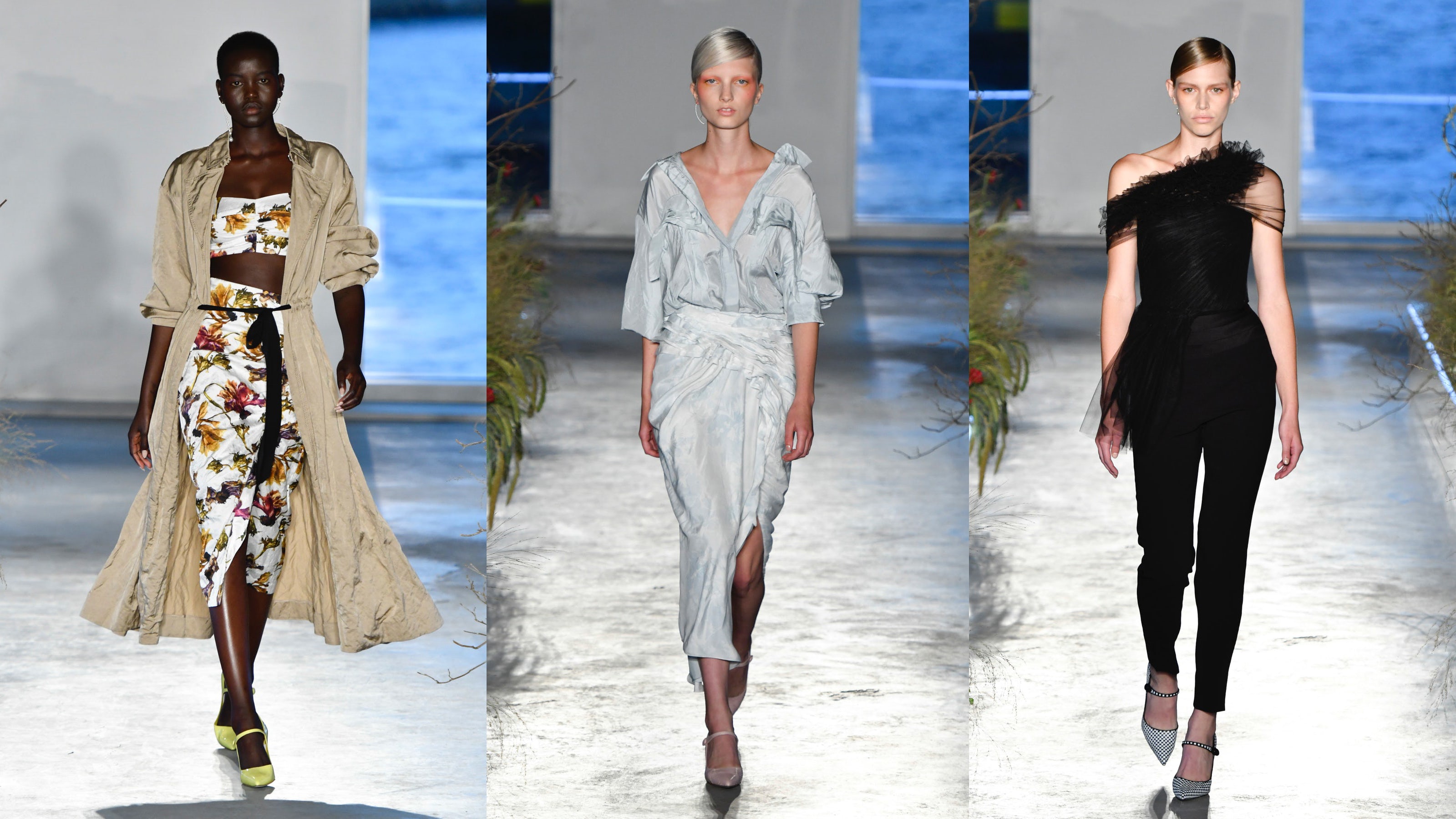 “It’s given me a lot of time to think, regroup and just be very creative again,” he said. It also allowed him to loosen up. Wu is a master at creating beautiful eveningwear with technical precision, but the result can be boring.

On Sunday, he let go some of his signature polish — “making it a little less perfect,” he said — and it paid off in the form of hand-washed, wrinkled silk dresses and separates. A cowl-neck dress and pocket shirt in this fabric, printed in a marbled light blue with an outline of flowers, stood out.

Meanwhile Prabal Gurung, who has brought a political point of view to his brand since the 2016 US presidential election, is also reconsidering his role in the American fashion landscape. “As a designer, I can speak out about social causes; it doesn’t happen in a lot of countries,” he said.

At a meeting late last year, an unnamed executive asked him, “How are you going to define America? You don’t look American.” It put him on a path that led to Sunday night’s runway show, which marked his 10th anniversary in business with an ode to an inclusive and optimistic United States, complete with his take on symbols of Americana — crisp white poplin, denim, cowboy boots, hippie-inspired tie-dye — worn by a roster of ethnically diverse models. The show opened to the sounds of Sam Cooke’s “A Change Is Gonna Come.” 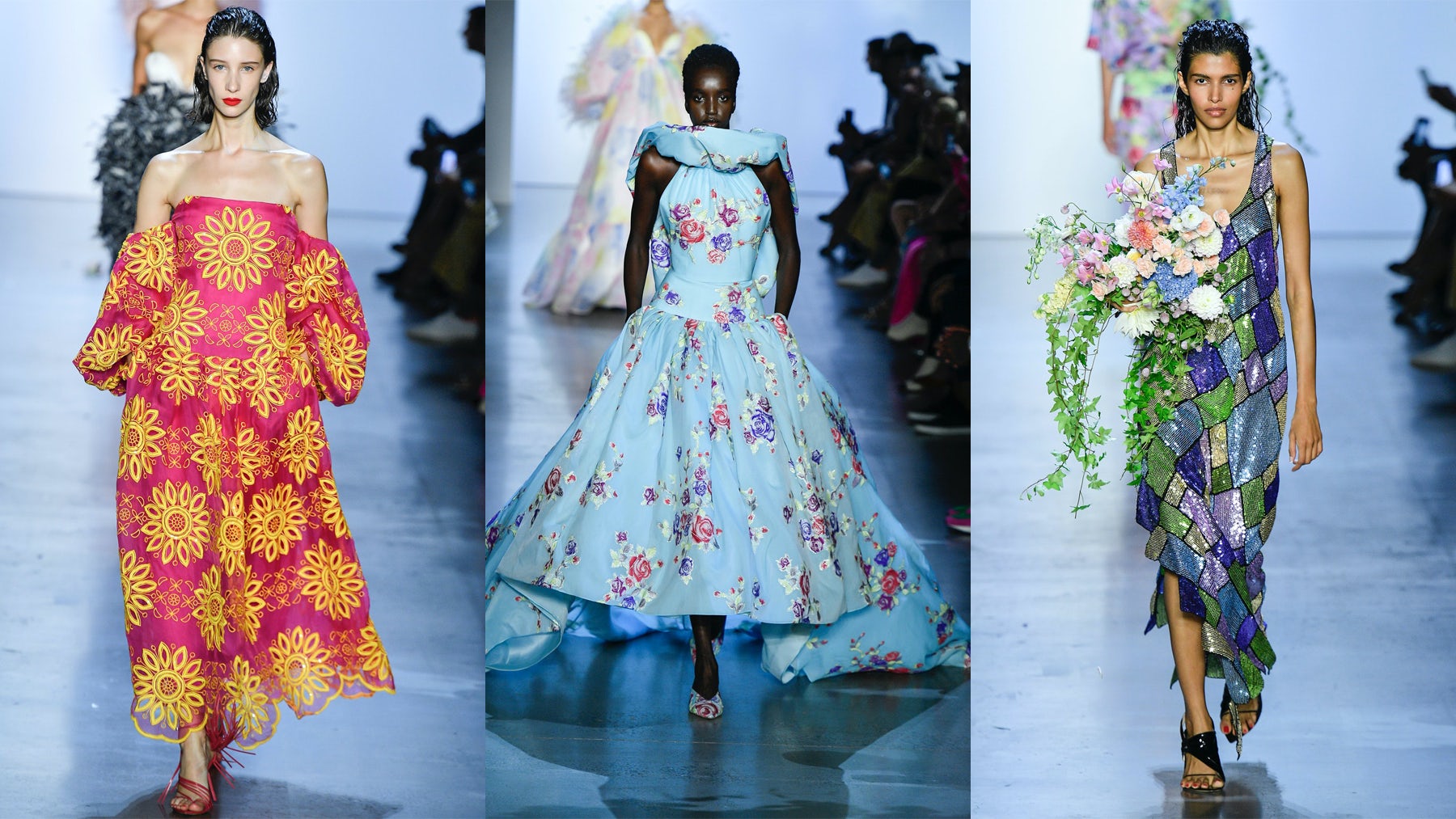 Gurung’s pro-immigration stance comes as no surprise. He recently denounced Stephen Ross — the chairman and founder of Related Companies who hosted a lucrative fundraiser for President Trump in August — by pulling his show from Related’s Hudson Yards development. “No longer can we be silent about things,” he said backstage after his show on Sunday night.

But the pageant sashes worn by his models during the finale — printed with the words “Who Gets to Be American” — hammered the message home perhaps a little too hard. The core of Gurung’s collection — much of which featured his signature take on cocktail dresses and evening gowns with details like button side seams, feathers and cut-out waist knots — was a beautiful melting pot of American tropes. They didn’t need the sloganeering.

Meanwhile, Rosie Assoulin put her chaotic eye to work injecting the magic of the summer season into her latest collection, presented in the middle of the restaurant Bocce in Union Square, where guests could design their own pickled jars of carrots and radishes. Ingredients on display included peppercorn, shallots and sage. 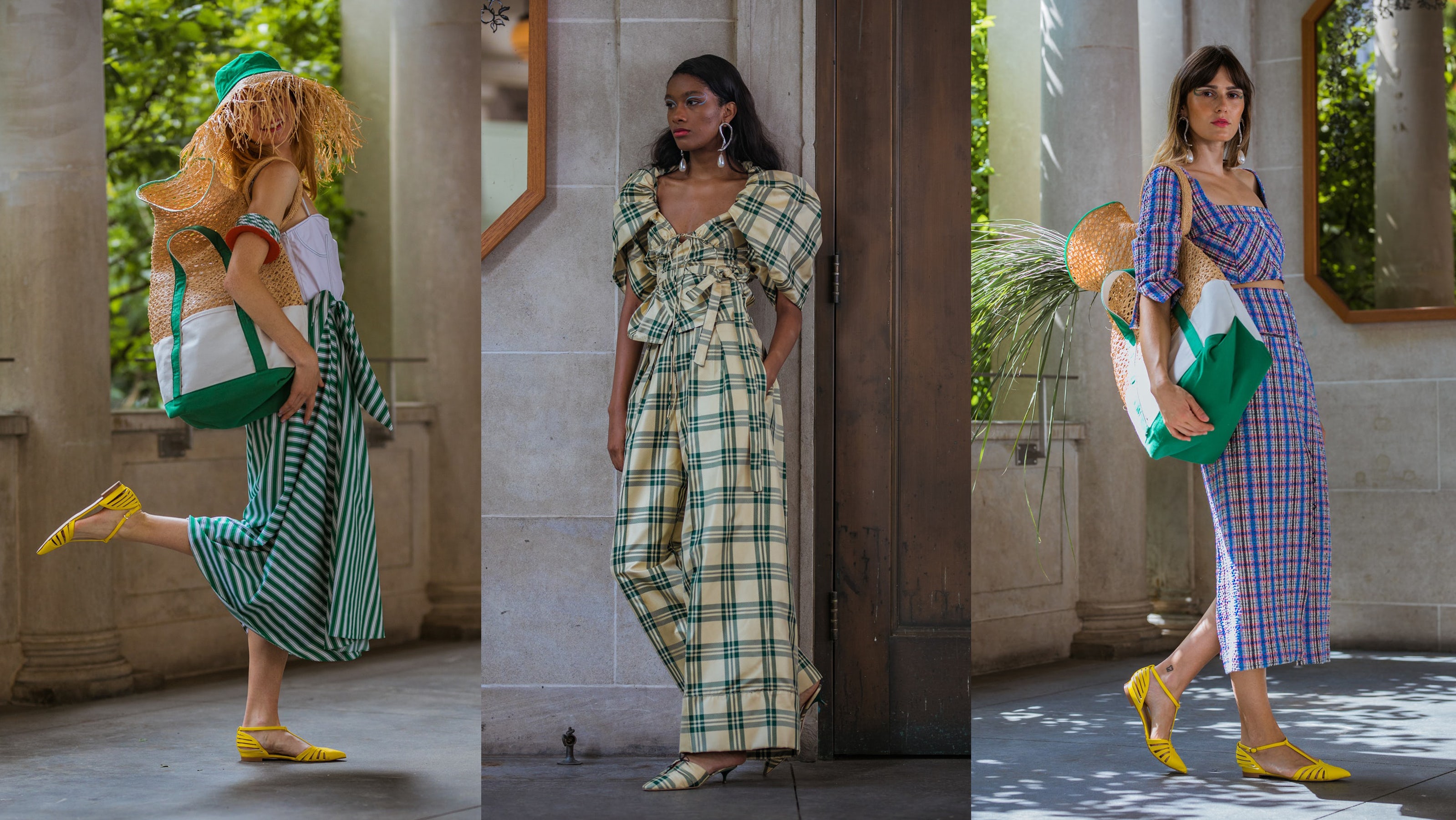 The metaphor was apt — a designer collection is a creative mix with a deadline. One hopes it will have the same appeal as the preserved vegetables when it hits stores in six months. Assoulin, who calls the summer her “happy place,” said she wanted to bottle the season’s colourful sunsets and adventurous escapes.

“It’s sort of a pure filter of everyone’s good vibes from their summers,” she said. It came across in the clothes through clever hybrids: a bucket hat extended with a straw brim, short shorts attached to an open skirt, a striped Oxford shirt with bangles attached to the upper arms. A styling trick made easy.

“Everything is integrated,” said Assoulin, explaining that she wanted that hybridisation of, say, a bathing suit attached and layered under a dress, to be visible. She feels the world is asking women, and fashion designers, to be delicate, creative and utilitarian at the same time, and she wants to figure that out in plain view.

“We have to decide what works for us and think of new solutions without being so serious and also saying, ‘We’re not perfect and no one has answers,’” she said.

But Assoulin knows what feels right to her, and that’s the joy of her voluminous silhouettes and funny little details. The launch of her basics line this past spring, By Any Other Name, also frees her up to swing bigger with her namesake line.

“It definitely feels like the pressure valve is off a bit,” she said. “I go with what feels right.” 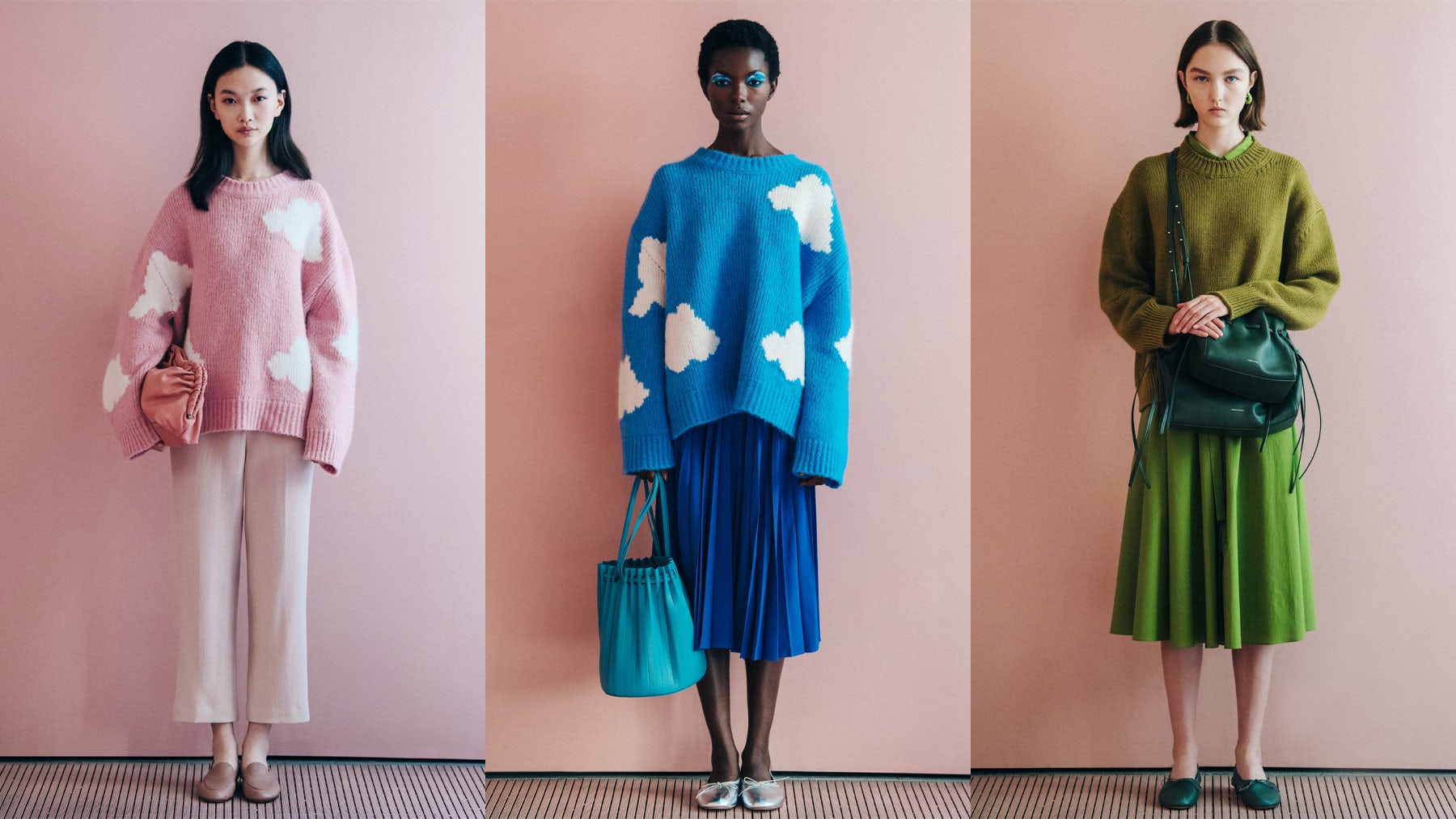 Rachel Mansur and Floriana Gavriel also know how to rely on their instincts. When they shot the first images for their namesake line seven years ago, they couldn’t afford to splurge on fancy props, so bought fruit from the grocery store instead. “We had no money,” said Mansur at the Autumn 2019 presentation at the brand’s Soho boutique on Sunday afternoon, which was transformed for the occasion into a perfectly arranged produce aisle with troughs of peaches, oranges, pineapples and dragon fruits.

The abundance of perishable goods was a clever reminder that Mansur Gavriel is celebrating a new milestone: last week, the accessories and ready-to-wear label sold a majority stake to a New York-based private equity firm, GF Capital Management & Advisors, and hired a new chief executive from Ralph Lauren, Isabelle Fevrier.

“It definitely feels like a new chapter, just being self-funded for so long — it’s difficult,” said Mansur, adding that she and Gavriel are eager for help on the business side.

The co-designers have made it far on their own and with the help of exiting President Shira Sue Carmi. They switched to a see-now-buy-now presentation strategy in 2017 that still makes sense for their soft tailored coats and pleated bucket bags, a newer take on their original it-silhouette.

At the presentation Sunday, the new collection wasn’t just viewable on the models, but also ready to shop on the shelves and racks. While the offering did not deviate from the supple separates and sensible, sophisticated shoes the brand does so well, a new crocodile-embossed top handle claps bag stood out, as did a cloud-print alpaca and wool-blend sweater. A sign of blue skies to come for the freshly financed designer brand.