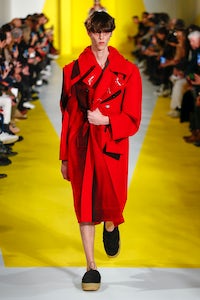 PARIS, France — John Galliano is in love with the idea of “dressing in haste”. With his first menswear collection for Maison Margiela, that seemed most evident in the number of looks that were essentially man-in-coat-and-nothing-else. There’s a courier at the door, you aim for maximum coverage with minimum effort. Makes sense.

But what it also meant was that Galliano’s menswear debut at Margiela was an outerwear sensation, from first to last. First was a red duffel which the model’s tentative stance turned into a clutch coat. That set the tone for what followed, a sly sideways glance which was quintessential Galliano. Last (or at least second to last) was a creamy white trench, dissected in the closing look by Galliano’s other passion, the technique called decortiqué, which reduces garments to their skeletal essence.

Almost everything in between was sheer joy. Decortiqué exerted a toll on conventional structure. Sweaters tended to lose their hems, a leather jacket transmogrified into a corset, an overcoat was suddenly a suggestion of a something shorter. In Galliano’s hands, you could feel these forensic processes becoming gleeful exercises in all that’s possible. Alongside the traditional anchors of substance – pinstripes, herringbones and tweeds, even a multi-pocketed leather jacket and a yellow puffa, and most of the coats – there was a whole lot of clear plastic, and an Aran knit moulded from rubber. Galliano was always comfortable with paradox. Here, substance and evanescence simmered together.

The finale was mad. To the soundtrack of One Flew Over the Cuckoo’s Nest, models walked with heads wrapped in post-lobotomy bandages. It was a bizarrely memorable way for Galliano to stake his claim to this significant slice of the Margiela legacy. But, for all that peculiarity, his most memorable outfit was actually a bias-cut cobalt blue suit which, in its perverse combination of purest technique and languid glamour, hinted at new horizons for the brand.