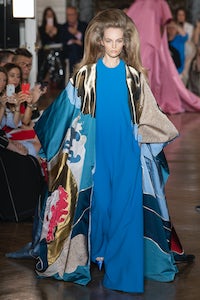 PARIS, France — After coming down to earth from Pierpaolo Piccioli’s couture presentation for Valentino — where “everyone was going up in foam and thunder”, to quote the Vogue immortal Diana Vreeland — I’d like to say words fail me, but obviously I can’t, because I have to say SOMETHING.

Besides, words are where Piccioli started. The other day in Valentino’s Parisian nerve centre on the Place Vendôme, he was talking about Molly Bloom’s soliloquy in James Joyce’s “Ulysses.” He’d read it in Italian (how many people do you know who’ve even read it in the original ENGLISH?) and he was struck by how deeply the reader came to understand Molly through her stream of consciousness.

He related. Working on this new collection, he’d been driven by instinct, not thought. And touch, the profound connection between cloth and hand, the emotion that links the designer, the artisans working in the atelier and, finally, the client. Stream of consciousness couture. Is such a thing even possible? If it looks like the collection Piccioli showed to close couture week on Wednesday night, then it should be mandated in the Chambre Syndicale’s famously stringent rules.

He used to greet the press for previews sleek in a black suit and tie. On Wednesday, Piccioli was tousled, raffish in a black t-shirt. He’s unleashed. “I never thought to have all this in my life,” he murmured. With a men’s show by way of comparison a few weeks ago that suggested a designer trying too hard to connect with a new fashion constituency, Piccioli’s couture offering was supremely relaxed, confident in its grandeur.

The depth and richness of the colour palette was breathtaking. “On a tiny dress, maybe I wouldn’t like the colour, but I like to be brave.” Tiny? Brave? Piccioli smashed proportion to smithereens with billowing organzas and silks, and a closing clutch of taffetas, the last one a cloud of tangerine in which Adut Akech floated like a celestial vision.

Piccioli grew up in Rome, where classical mythology was inescapable. Here, myths were woven, embroidered, intarsia-ed, appliquéd into capes, coats and dresses. But he’d let the women in the ateliers name the pieces. To them, Apollo on a drawstring, floor-length tunic looked like an Italian pop star from the 1980s named Nino.

It was one way for Piccioli to underline the connections in the creative process, and establish new myths while he was doing it. You wanted to know more: the story, say, behind the characters on the cape that opened the show, or the inspiration for the black and gold brocade dress encrusted with arabesques and incongruous mint bits. The model’s head was encased in a tight brocade helmet. It was a Renaissance vision, and yet it reminded me of Fritz Lang’s “Metropolis.”

On Piccioli’s moodboard, there was a small photo of Maria Callas and Pier Paolo Pasolini on the set of “Medea.” They were clutching hands, patently adoring each other. But their love was impossible, Piccioli said. Molly Bloom’s words aside, this image was another of the collection’s starting points for him.

A passionate impossibility, an impossible passion. His own relationship with couture, perhaps? In the midst of the glorious spectacle, I was drawn back to one look that was epic in its incongruity: pleated wool trousers in maroon, a man’s shirt, pale yellow, over a glam lame turtleneck, the whole package wrapped in a sweeping green sequinned cape. The atelier had called this particular item “Liza Minnelli”. It was an impossibility, but it was a triumph.