NEW YORK, United States — “It’s really easy to be loud. How do you still have that same impact in your ideas and what you are making without it being, ‘Look at me?’” This was the question on the mind of Eckhaus Latta designer Mike Eckhaus ahead of the label’s Spring-Summer 2019 show on Saturday afternoon. It was staged in a post-industrial building overlooking a recycling plant in Bushwick, where a sign promised: “Advanced technology for a greener tomorrow.” 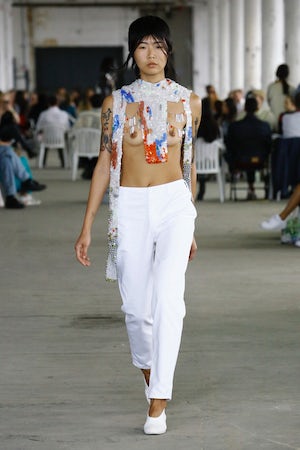 There was real depth to the presentation, which raised questions about consumption, sustainability and the future of mankind, as a gleeful group of children — The Young People Orchestra — provided a tribal soundtrack by banging on buckets and ringing bells.

As for the clothes, the show’s opening dress was the kind of piece that would have gone unlined in seasons’ past, but the added layer let its twisty, gathered silhouette shine. Other highlights included the tailoring: an oversized blazer nipped at the waist with toggles and easy, cowl-neck evening dresses stood out. But the final looks — a mix of bias-cut day dresses and the armour-like beaded strips worn over bare chests — really underscored Eckhaus Latta’s growing confidence.

The designers get pigeon-holed as art school kids who create unwearable pieces for the sake of it, but the duo has already proven they are capable of delivering much more without sacrificing the experimental and thoughtful nature of their approach. Preparing for an exhibit of their clothing that is currently on display at the Whitney Museum pushed them to consider digitally printed florals and dense beading, for example. Their clothes can be ostentatious one minute and quietly refined the next, and it's exciting to see these seeming opposites blur.

Pyer Moss designer Kerby Jean-Raymond, meanwhile, is pushing himself to think more like an artist than a designer. In recent years, his runway shows have tackled big topics, including Black Lives Matter and mental health. But usually, his collection was the weakest link. 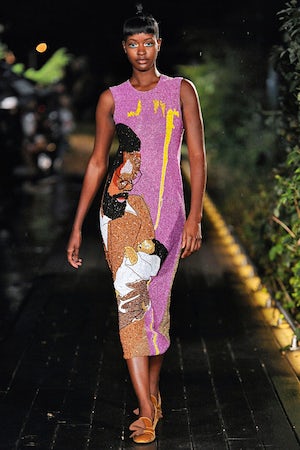 Last season marked a major shift: Jean-Raymond refused to shut down his line after a dispute with his former investor, choosing instead to buy his partner out and begin showing his main collection alongside a Reebok collaboration that no doubt paid some bills. The result felt like a fresh start that underscored the quality of his colour-blocked sportswear and retro outerwear.

On a rainy Saturday night in Weeksville — a neighborhood founded by African-American freedmen in Brooklyn — Jean-Raymond again enlisted a 40-person gospel choir to perform, but his printed silk skirts and billowing tracksuits held their own.

He was inspired by the joys of Black American family life, using photographs of baptisms and backyard barbecues as reference points. Artist Derrick Adams painted 10 family portraits that Jean-Raymond blew up and printed on boxy t-shirts, elevated separates and a Swarovksi-covered column dress. Details from the photographs, like sofa tufting and Victorian curtains, were reimagined with stoles and collars.

Jean-Raymond really understands his brand. And between his main line and the Reebok collaboration, there was lots on offer — fashion for the whole family. 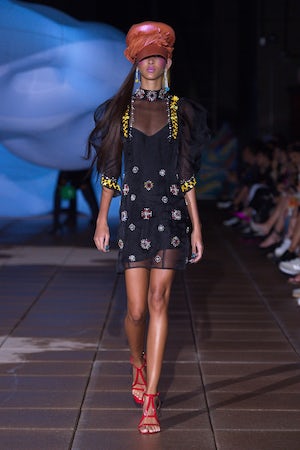 Area designers Piotrek Panszczyk and Beckett Fogg were also thinking about family dressing — specifically the mothers who might be attracted to their bedazzled suiting at Barneys, and their daughters who might pick up one of their pink lamé mini dresses at Kith after seeing Kendall Jenner wear them on Instagram.

Area’s models cruised around giant inflatable clouds on Saturday night inside the caged roof of the New Design High School on the Lower East Side, with an Estonian funk song on repeat.

The designers said they only really started understanding where they fit in the fashion industry a year ago, leaning into the playful garishness of their nightclub-ready looks while creating more versatility in their pieces for their fearless customers. “You have to have an emotional connection to buy something at full-price retail now,” says Fogg.

This season, the duo took inspiration from plastic inflatable toy dolls designed by Czech artist Libuše Niklová, and the costumes worn by legendary nightclub singers like Nina Simone. It’s a hodge-podge of references but their customer is someone who performs in her everyday life — and loves the garish opulence that Area is more than happy to deliver. The approach worked better in a crystal-covered flapper dress and the subtly shiny geometric print knits than the simpler pieces covered in nets of cascading crystals. 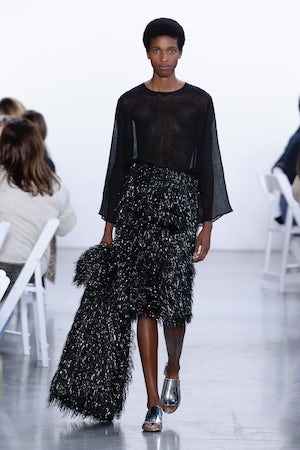 On Sunday afternoon, Mansur Gavriel presented its autumn 2018 collection with a pastel pink champagne tea party, complete with macaroon towers and individual desserts for each guest, sitting at round tables inside one of the galleries at Spring Place. Designers Rachel Mansur and Floriana Gavriel expanded their existing ready-to-wear categories — soft but solid a-line outerwear and oversized sweaters in cashmere, fine camel hair and shearling dresses — with their very particular take on attention-grabbing evening wear.

Despite having created a brand known for its minimalism, the designers said they loved embellishment. While the floral sequin-embellished gowns seemed a bit out of place, the textured lurex separates had the same detached, sexless appeal of the rest of their growing ready-to-wear.