Raf Simons proves that a good nightmare is much better than a bad dream. 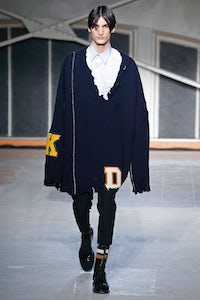 Raf Simons proves that a good nightmare is much better than a bad dream.

PARIS, France — David Lynch turned 70 today. “I’m dedicating the show to him,” Raf Simons said after a presentation that stepped fearlessly through Lynch’s nightmarish mirror of apple-pie Americana. Nightmares and Dreams he called it, and it was a brilliant, disturbing descent into a world where imperfections ruled, where youthful idealism had been literally chewed to shit, where the woods were dark and full of danger. Welcome to Raf’s nightmare.

The one-sheet scrupulously handed out to each guest listed eight groups of four notions each. The first group named Lynch and his musical collaborator Angelo Badalamenti, the designer Martin Margiela, who continues to be all things to Simons, and the artist Cindy Sherman, whose travelling show is called Untitled Horrors. The last group listed the titles of four Raf Simons shows from way back, when his exaltation of adolescence marked him as a fashion visionary.

Between those two groups was a free-associating grab-bag of adolescent hope, fear, confusion, pain, from Freddy Krueger’s Elm Street to Larry Clark’s Tulsa, from boy scouts to The Breakfast Club. And at the very end waited the Black Lodge and the White Lodge, from Lynch’s Twin Peaks, where terror came home to rest.

The list was by turns funny, macabre, evocative, provocative, and it merited analysis — like the one you’ve just been subjected to — because it so clearly clarified Simons’s state of mind, the bird flying free from the big Paris fashion cage, finding his wings again. Reflecting on that clarity, and the twenty years — already? — that he has been doing what he does, he said, “You start to see you have your own uniform.”

And there it was: the skinny and the oversize, the moth-eaten and the bandbox new, the innocent and the experienced. Clothes to grow into and out of, clothes to cherish, clothes to discard. The wardrobe of a boy who is living in his own head, pictures forming as he listens to his music, pictures dissolving as he finds new sounds. All the time, the real world is chewing at his consciousness, wanting him to change. So he moves further away, into the woods. BAM! Twin Peaks. Like every other darkling dreamer of his generation, Simons surrendered to Lynch’s vision. The extent of that surrender was elucidated on his catwalk tonight where his models had the dazed mien of college boys who’d been to hell and back with Laura Palmer.

Adding a sinister subtext, Kim Fowley, the monstrous Svengali of LA punk, was growling about “young American boys and girls” on the soundtrack at that particular point. Later, Elvis crooned Blue Moon and Tommy James quavered his way through Crimson and Clover and, in this context, both songs were a reminder of Lynch’s unhinging use of  the bland Blue Velvet in his film of the same name.

Everyone remembers the scene in Nightmare on Elm Street where Freddy’s arms stretch till his fingers scrape down alley walls. Simons managed a similar macabre extension with his sleeves tonight. Knitwear gnawed (like Freddy’s) trailed southwards. So did coats and massively inflated puffa jackets, all mounted on pipe-stem legs like something from another nightmare, Tim Burton’s. Letter sweaters, staple item for big men on campus, were torn and frayed, the American dream in tatters. (You can choose to be as political as you like with that, but don’t expect Simons to follow you.) Simons insisted he didn’t want to tell a story. Too late. “I’m just making beautiful things, and things go wrong and dark,” he said. David Lynch couldn’t have put it more succinctly. Sensational. 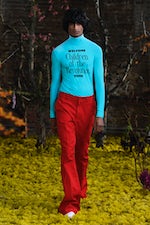 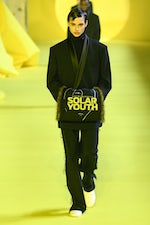 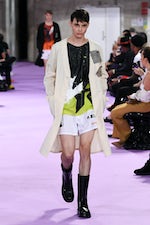 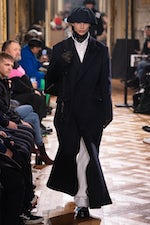